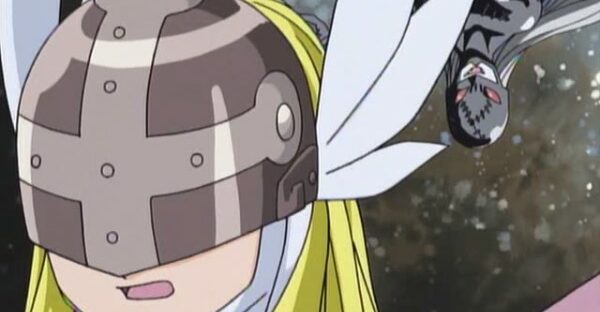 There’s not many times a change in this English dub of Digimon Adventure makes me both mad and confused – why is the English title the complete opposite of the original title? Joe’s internal struggle is only mentioned once in this episode and it’s by no means the main focus of this episode. So why change the title?

Joe and Mimi watch as the Metal Empire area reforms. Mimi and Joe have found an army of Digimon they’ve previously met in the first half of the series such as Gekomon, Otamamon, and Frigimon. Mimi is tired and the other Digimon go to look for food. While Joe and Mimir est, Joe remembers what his brother told him about how he didn’t have to become something he didn’t want to. Joe realises he just should focus on growing up and becoming a better and stronger person.

The group continue on and reach a completely depressing Primary Village with a fairly depressed Elecmon who is playing an instrument of depression, brooding, and edge (the harmonica). Mimi and Joe are slightly dissapointed to see Elecmon and not Matt (though in my opinion, it’s a clear upgrade), but decide that matt must have crossed the lake on a swan boat because we’re calling back to the first half of the season just left and right here.

Meanwhile, Tai and his group have been creating graves for the Numemon that recently die and then decide to continue up Spiral Mountain. One of Piedmon’s henchmon, LadyDevimon attacks the chosen. Tai won’t let Agumon warp evolve to conserve his energy for later – which, by the way, is one of the few times any character addresses why they’re not immediately evolving to their strongest form.

Tai asks Sora and TK to find Matt so that they can all be together to fight Piedmon while Kabuterimon and Angewomon fight LadyDevimon. Kabuterimon evolves, but the fight between Angewomon and LadyDevimon becomes more of a cat fight between angels. Kari is being really supportive while the boys are uncomfortable watching. Angewomon defeats LadyDevimon, however, Piedmon arrives, meaning that Agumon can finally warp evolve to WarGreymon. Tai is worried and is thinking about how everybody is needed for this final battle.

Rating for my Rewatch of Digimon Adventure Episode 50

Again, I love how we’ve been getting so much focus on children who aren’t Matt and Tai this arc and I love how we have focus on Mimi and Joe.

So what were your thoughts on your rewatch of Digimon Adventure Episode 50? Let me know in the comments or in the discussion thread on /r/Digimon!