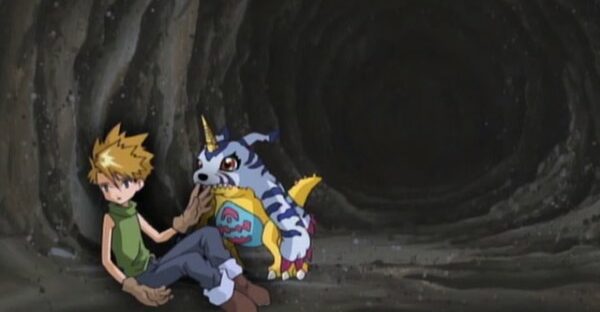 Ah, the cave of depression episode.

“The Crest of Friendship”
(“Piemon, the Clown from Hell”)

Matt is wandering into a dark cave and starts to feel despair and depression when he thinks about how much of a bad brother and friend that he’s been. Gabumon disagrees, but Matt points out how Tai had been a better brother to TK than he ever was and then demands Gabumon to leave him alone, causing Gabumon to BITE Matt which more or less snaps Matt out of part of his depression, who now says Gabumon can stay. Matt says that he’s always felt alone and he’s been pushing people away since his parents got divorced and would never let anybody see him cry or have emotions. However, he now realises that he does have friends and isn’t alone.

After he and Gabumon resolve to be best friends forever, the cave, which was just a metaphor apparently, dissolves around them completely, causing them to be reunited with Joe who finally returns Matt’s harmonica.

Meanwhile, Sora and TK, who were sent to find Matt in the previous episode, find Matt’s boat. Sora begins to doubt her own personality, causing herself to be caught by the same cave of depression as Matt was caught in earlier. However, Joe and Matt find TK, who informs them of what just happened to Sora. Matt and Joe dive into the cave to save her by giving her confidence to keep going and how they came to the Digital World for a reason and that they should be focused and confident.

Sora realises this too, causing the cave to disappear. They all rejoin Tai and his group and find WarGreymon to be seriously injured after a battle. Tai appears to actually be hurt, Matt approaches him and says how their friendship means a lot to him. Tai is happy to hear this and says how he never stopped believing him Matt, causing Matt’s crest to glow, which heals WarGreymon and helps Gabumon to warp evolve so he too can fight Piedmon.

Rating for my Rewatch of Digimon Adventure Episode 51

Digimon rarely gets too emotional or deep as it’s just a show for kids, however, this episode really gets dark in terms of the fragile nature of the human mind, especially with how much responsibility these children have that’s suddenly dropped onto them.

So what were your thoughts on your rewatch of Digimon Adventure Episode 51? Let me know in the comments or in the discussion thread on /r/Digimon!