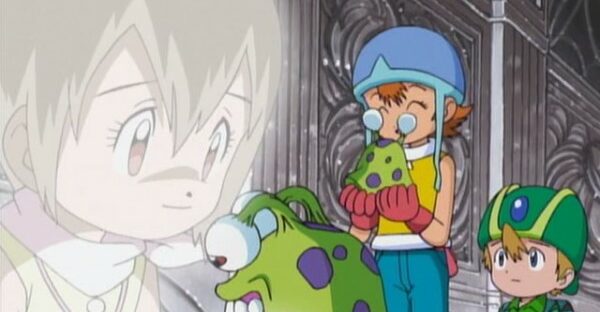 Alright, let’s beat up Machinedramon because it’s his second episode and only Puppetmon gets more than two episodes.

“The Crest of Light”
(“Farewell, Numemon”)

Kari is back to full health, unfortunately, the Adventure writers LOVE separating the characters. At least Tai somehow, prior to be separated, dropped the medicine where Kari would have access to it.

The children are in the sewer. Sora, Kari, and TK find that WaruMonzaemon has a Numemon slave labour work force who are powering the city. Kari wants to help and starts glowing because the writers realise that we haven’t explained enough about what her crest’s trait is.

Kari rescues the slave Numemon and the Numemon are obsessed with her now and call her ‘Queen Kari’. WaruMonzaemon shows up and the Numemon try to protect her. Kari faints and her powers of light which are never to be mentioned again give the chosen Digimon the power to evolve.

WaruMonzaemon reports his loss to Machinedramon and gets immediately murdered because he’s a henchman.

Meanwhile, Tai and Izzy are exploring and Tai is getting angry again because everyone but him wants to rest – oh yeah, remember when Matt did the same when he was worried for TK at the start of the show? Well Tai immediately starts beating up Izzy this time! Tai hears somebody approaching so continues the fight but he’s only pretending this time (it’s okay to get mad and punch you friends, kids!).

Thankfully, the approaching Digimon is the exact same Andromon as the children met at the start of the show. He knows of Queen Kari.

Fortunately, Numemon protect her again but the Numemon are all sadly murdered easily, causing Kari to glow more which gives Agumon the power to warp evolve to WarGreymon and anime slice through Machinedramon making these past two episodes fairly anti climatic and pointless.

The chosen decide to set up a shrine for the Numemon and then decide to head to face Piedmon.

Rating for my Rewatch of Digimon Adventure Episode 49

Everything is so convenient and the battle is so anti-climatic and pretty much goes the same way as the battle against MetalSeadramon.

So what were your thoughts on your rewatch of Digimon Adventure Episode 49? Let me know in the comments or in the discussion thread on /r/Digimon!