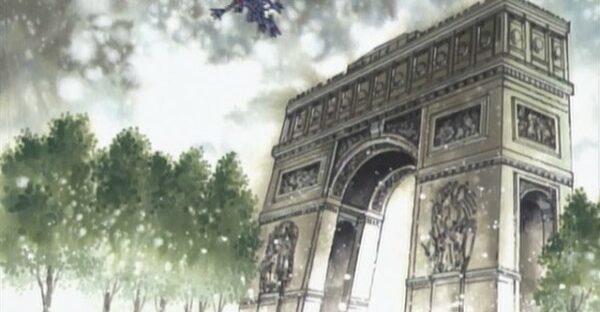 As the children walk through a desert (because it’s Digimon), Kari collapses because the writers remembered that Kari is actually a fairly ill girl. The writers forget in 02, Tri, and Kizuna and the illness is never mentioned again after this arc, by the way.

Anyway, Kari collapses and Kabuterimon flies them to a conveniently placed city (it’s Machinedramon’s territory, so I guess it’s not actually too convenient) and the group plan to search for some medicine. Which I have no idea why they KNOW there will be medicine here, but whatever.

Tai gets emotional and explains it’s because once he was meant to look after his sister at home but he took her to play soccer and she almost died. Even then, Kari apologised to Tai. Yeah, I’m not sure who leaves a 5 year old under the care of an eight year old either.

Izzy hacks into the network so the army can’t find them (the army have put in Operation Elimin-6).

Tai and Izzy reuinte wtih Sora, TK, and Kari after they escape the nukes but Machinedramon’s attack causes them to plunge through the earth. Or something.

Rating for my Rewatch of Digimon Adventure Episode 48

I love the Metal Empire and I love this arc because of the great showcase of the Digimon belonging to each family of Digimon.

I have issues with this episode in terms of the writers pulling out the ‘sick girl’ trope only twice and never really touch it again in any Adventure series. But that’s more of an issue with Adventure in general. Sick kids usually are still sick teenagers.

So what were your thoughts on your rewatch of Digimon Adventure Episode 48? Let me know in the comments or in the discussion thread on /r/Digimon!