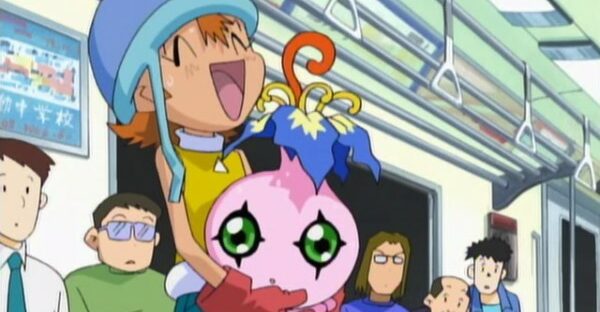 I love this episode just because of the level of detail in all the scenes, while not much happens, It’s a fun episode to watch just for the real life locations.

Tai thinks that Myotismon is going to sink his fangs into the Eighth child in the recap.

Myotismon finds out that the chosen have returned to the human world, DemiDevimon advises him that they’re lookng everywhere for the eigth child.

Meanwhile, the chosen are trying to get to Odaiba on the subway, Mimi wants to eat but Tai says they need money for the subway. Joe can’t read the map as it’s confusing and Mimi doesn’t know what a subway is. Suprisingly, the English dub uses the real station names. The Digimon have to pretend to be toys. Koromon and Tsunomon try to attack a train, thinking its a bad guy.

On the train, Sora offers her seat to a mother and child but the ugliest baby in the world starts pulling on Yokomon, who eventually yells at the child. Sora comes up with an excuse that she’s a ventriloquist and everyone now wants the toy and gets off the train when Sora tells them she got the toy from the department store at the station they’re just passing. Weird limited amount of voice actors where all of the passengers have the same voices as regular characters.

All of the children fall asleep and don’t get off at their station (Nagano, which is incorrect, pretty sure they mean Nakano, Nagano is…fairly far away and not near Shinjuku). The group end up getting off at the end of the line (Shinjuku) and they decide to eat. Izzy and Joe get seperated and the group eats without them.

The children end up hitch hiking and they all do fairly badly except for a conveniently placed relative of Sora’s. The English dub fixes several parts of this scene which are fairly creepy (the woman flirting, the fact it’s not a cousin but a creep, etc).

Sora’s cousin says that all the boys shouldn’t make a sound, Tai says he’s a ‘lamo’ and Sora says he’s the black sheep of the family. I remember in the original the music that the driver is listening to is Etemon’s character song.

The radio in the car mentions the monster fight in Highton View Terrace and how it was similar to the events four years ago. Koromon poos on the seat of the car and Sora’s cousin gets super mad. Sora takes blame for it, but he doesn’t believe her and starts trying to fight Joe, of all people. Izzy tries to break it up, but THE ADULT TRIES TO MURDER THE NINE YEAR OLD BY PUSHING HIM OFF THE BRIDGE. Motimon evolves to Tentomon and saves him, but then a Gesomon shows up. Gomamon evolves to Ikkakumon so we can have our mandatory monster battle. We get ‘Hey Digimon’ despite it just being a fight between Champion levels. The onlookers wonder if it’s recording a tv show or commercial.

The children escape on Ikkakumon after the battle. I love how proud Joe is of Ikkakumon. Tai says this is free and better than the subway. Mimi is still hungry.

Rating for my Rewatch of Digimon Adventure Episode 30

We get absolutely beautiful shots of Tokyo in the Myotismon arc – the level of attention to detail is just incredible. The English dub also improves a few things as well; I much rather prefer a relative picking up a child rather than a completely stranger who seems to be hitting on young girls.

So what were your thoughts on your rewatch of Digimon Adventure Episode 30? Let me know in the comments or in the discussion thread on /r/Digimon!