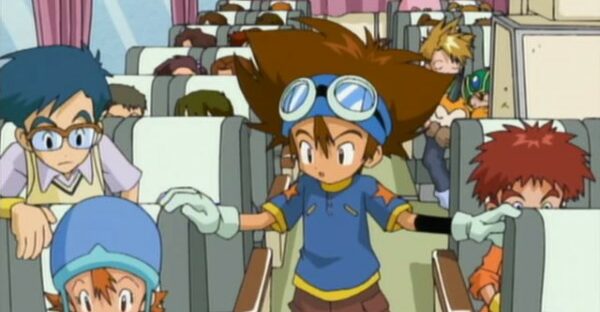 I really like this episode. It’s not what I would call one of my favourites, but I really like the small bits of flashes of memory as the children recall a huge fight years prior where they first encountered Digimon.

In the recap, Tai mentions how they’re going to find the ‘eight chosen one’, not ‘eighth Digidestined’.

The children meet their teacher, and tell him that they found these plush toys on a path and they’re bringing them back for Tai’s sister (Tai accidentally mentions returning home during camp). Camp is ending early due to the weather, so they’re going home.

Is the English VA for Mr Fujiyama the same VA as Etemon?

The chosen get dropped off at Highton View Terrace because they guilt trip the teacher.

Gatomon is looking for the eigth child and Myotismon is annoyed that they haven’t been found yet, he has sent his henchmen to hunt down the child with fake copies of the tag and crest, but he has the original. Myotismon says “And when you do find him, then he must die.”, which is probably the most violent line in the English dub of Digimon.

The group reach Highton View Terrace and they all realise that they all lived here at some point. A Mammothmon working for Myotismon appears, so Biyomon evolves to Garudamon to fight it, prompting the TK to remember two Digimon fighting, which his parents said never happened. It turns out that the Digimon that the children saw were Greymon and Parrotmon, the children remember bits and pieces, leading to them conclude that seeing the event four years ago is why they were chosen and how the eighth child would have seen the same battle.

Koromon realises that it may have been a different Koromon and Tai realises that’s why Kari says she had seen Digimon before, but nobody ever points out it might be Kari. So it can’t be her. Obviously.

Rating for my Rewatch of Digimon Adventure Episode 29

As the first part of the Digimon Movie actually aired prior to episode one of Adventure in Japan, the Japanese audience would have been excited to see what they saw actively referenced in the show.

However, the episode still works for western audiences who wouldn’t see the ‘movie’ for a few years. I actually prefer finding out about the connection in this episode, rather than prior to episode 1.

Of course we will find out more about this event later on, but it’s fairly fun to see the children remember, even if it’s oddly similar to watching them just straight up have PTSD flashbacks.

Though I have no idea why Joe wouldn’t have remembered it straight away.

So what were your thoughts on your rewatch of Digimon Adventure Episode 29? Let me know in the comments or in the discussion thread on /r/Digimon!