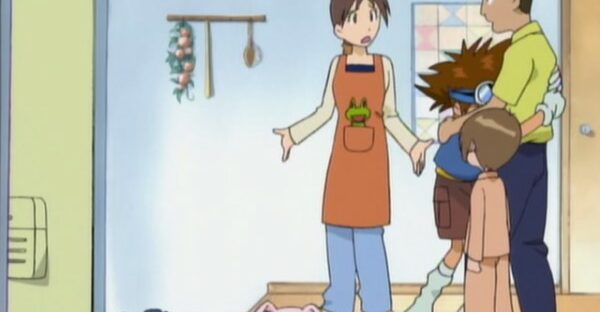 ‘Izzy goes clubbing’ is how I always remembered this episode, but I’m fairly certain that never happens.

I like Joe narrating the recap and makes a joke about how people do this commute everyday.

Tai says it’s weird how Kari remembers what happens 4 years ago, and then wonders if she’s the eighth child.

Meanwhile, Kari’s parents arrive home and say that the Grandmother is okay because she had a bad fall and twisted her ankle. They say how her cold was: 1. just a cold and, 2. caused by not wearing a jumper.

Tai is emotional to see his family again and they’re so confused. Miko the cat has found a Digivice.

Meanwhile, Izzy’s Mum is being complimented by another Mum for raising Izzy so well. Izzy going to Tai’s house for a reference book. Izzy returns and installs a lock on his door so they don’t find Tentomon. Tentomon says that his Mum is lovely and attractive. Izzy has another flashback about hearing that his parents adopted him.

Izzy’s Mum says she heard a funny voice and if he has a friend he can come to dinner too. Izzy says he was practising a comedy routine. His parents are so supportive of his comedy routine and it’s so lovely and heart warming. Izzy thinks of Tentomon in his room and asks to eat the rest in his room, he thanks his Mum and says he loves his food.

Tai is eating so many servings of dinner because he hasn’t eaten real food for months.

Miko is pretty much fighting a bird for the random Digvice.

Tai asks Kari if she remembers what happens four years ago, Koromon asks if she has a Digivice, and Tai shows her. Kari says she’s never seen one. Tai and Koromon are tired, but Kari wants to stay up.

A Raremon shows up, looking for the Digivice and DemiDevimon is near some club. The Digivice/Eighth child is nearby.

Back to Izzy, we see the programs Gennai has installed on his machine, they’re all weird, but there’s a map of Tokyo and Izzy learns that there’s an unidentified Digimon in Tokyo Bay and he’s the only one awake. Izzy calls his friends, ignoring Gennai saying he’s the only one awake, to see if anyone else is awake. Tentomon says he was dreaming (probably of Izzy’s Mum). Tentomon wants to wear a disguise if they’re going out. It’s not a good disguise, but it is cute!

Raremon terrifies poor Miko. Tentomon and Izzy show up and Izzy can detect the Eighth child on his Digivice. Tentomon says Izzy should look for him while he fights off Raremon. He evolves to Kabuterimon.

Tai’s Mum wakes him and says that Izzy called and he sounded nervous. Tai calls Izzy’s Mum, and Izzy’s parents try to check on Izzy but find that the door is locked.

Meanwhile, Kabuterimon and Raremon are fighting while both DemiDevimon and Izzy try to find the eighth child, but it’s moving away too fast.

Miko gets scared by a dog while Izzy’s parents are suspicious but they say he’s getting older, but he was only at camp for a day. A crow steals the Digivice, and the signal fades out as Izzy and DemiDevimon see each other. Kabuterimon wins the fight and scares off DemiDevimon.

Kabuterimon and Izzy fly off as a TV presenter sees them flying in the air as we get ‘Hey Digimon’.

Myotismon, meanwhile, says how no Digimon is strong enough and he must deal with them himself.

Tentomon is still hungry, so Izzy goes to the fridge and overhears that his parents feel that Izzy is hiding something, but they say they’re hiding something too. Izzy feels bad for making them worry. His parents are talking about how he has to grow up on his own and he’s allowed to make mistakes.

Tai is wondering what Izzy wanted and Kari is worrying about Miko, Tai rushes off as he gets a Digivice signal for the Eighth child and Kari notices a pretty light – a crow flying past with a Digviice.

Rating for my Rewatch of Digimon Adventure Episode 31

This episode annoys me because the audience knows who the Eight Child is, but none of the characters seem to even really suspect it and Tai dismisses it fairly quickly and doesn’t really pursue his suspicions.

However, this episode is incredibly moving emotionally speaking with Izzy’s relationship with his parents.

So what were your thoughts on your rewatch of Digimon Adventure Episode 31? Let me know in the comments or in the discussion thread on /r/Digimon!