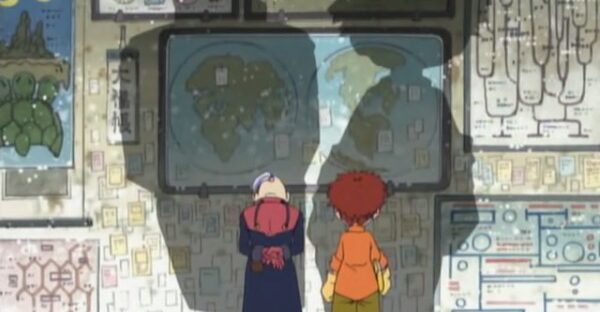 I’m always surprised this is an episode as in my mind it is completely combined with episode 27.

The children are talking to Gennai again, trying to work out how they can get through the gate, Gennai leads the group to his house, which is at the bottom of a lake. Gennai gives the children ten cards and informs them that nine of them can be used as a key to open the gate to the Human World. Gennai says using the wrong combination of cards could lead to a difference world.

During the night, Gennai tells Izzy about the attributes Digimon have – Data, Virus, and Vaccine. He says he has no attribute, so he is not a Digimon. Despite…the free attribute existing. Gennai updates Izzy’s laptop again with the ability to download an individual Digivice’s DigiDex, as well as a nice screensaver.

The group return to Myotismon’s castle and MegaKabuterimon fights off more Devidramon and manages to turn off the optical illusions. The chosen then try to work out which of the cards to use, but decide that Tai should make the decision as their leader (it was Joe’s idea first). Tai, as leader, then decides that Izzy should choose the grouping.

Izzy chooses to group them by attribute using the information on his laptop, but there’s still one left over, leaving Tai to decide which card to take.

A Dokugumon attacks and Tai is trying to decide which card to choose, Gomamon or Agumon. While the Digimon protect the children from the attacking Digimon, Tai chooses Gomamon’s card correctly and the door opens to the Human World. The children are back at the campsight, and their Digimon made it through with them, and they had been scavenging for food, but the Children are happy they don’t have to forage anymore.

Koromon asks Tai why he knew his card was the fake, to which Tai replies “I didn’t, I chose your card because you’re my friend.” Take that, Gomamon.

Rating for my Rewatch of Digimon Adventure Episode 28

Exposition the episode! It’s a fine episode, I guess, but it feels like a verbal wall of text that is fairly easy to tune out of, especially for the target demographic.

A fun thing is that this is the episode where Tai is straight up appointed the position of leader, which is nice.

So what were your thoughts on your rewatch of Digimon Adventure Episode 28? Let me know in the comments or in the discussion thread on /r/Digimon!