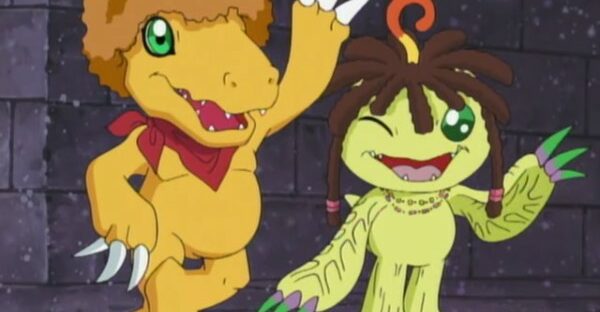 The halfway point of Digimon Adventure is the start of a new arc where our heroes meet a new big bad and find out that they can finally go home.

But it turns out that it’s more of a working via than a trip home.

“The Gateway to Home”
(“Vamdemon, the Castle of Darkness”)

Why is Tai doing the recap for Sora’s episode?

Gennai wants to talk to the children and has good news and bad news. The good news is that there will be an 8th child. Biyomon hopes that the new kid will have a children that can help them, which I’m fairly certain is the point. TK wants the kid to be his age, Mimi wants the kid to be a girl. Gennai doesn’t remember the name, but says the child is in Japan, but Myotismon is also trying to get to the 8th child.

Palmon and Agumon sneak in to Myotismon’s base in disguise, and it’s incredible; Punk Agumon and Reggae Palmon. We then are introduced to Gatomon, who says all the new recruits are weak compared to her as she’s found ferocious Digimon to help Myotismon. Myotismon has a gate to the Human World.

Meanwhile, Gennai is telling the children about the gate while Palmon and Agumon are having military training with Nanimon. All of the recruits decide to trick Nanimon into drinking soft drinking as that would make give him a sugar high and they can escape. Agumon and Palmon escape and are able to let the chosen into the castle. However the children get lost in Myotismon’s optical illusions.

Myotismon has all the cards to open the gate.

The children follow some of Myotismon’s henchmon, and show up as Myotismon is opening the gate. Myotismon asks them who they are, which is weird, considering he should know. Agumon and Palmon evolve and says that they don’t want to fight the Digimon that they trained with earlier but will if they have to. Gabumon, Tentomon, and Gomamon also evolve to their Champion stages.

The henchmen mostly flee, except for DemiDevimon. Gatomon shows up and punches the Champion Digimon. The children run for the gate, but Gatomon calls for Devidramon. Greymon evolves to MetalGreymon (he says his name twice for some reason in his evolution clip) and we get ‘Hey Digimon’, however, the children are unable to reach the gate to the real world before it closes.

Rating for my Rewatch of Digimon Adventure Episode 27

Another ‘heroes lose’ episode – it doesn’t happen often, as I mentioned when I was writing about episode 19, but when it happens, it’s usually done fairly okay and doesn’t happen to an annoying and boring extent as in the Royal Knights arc of Frontier.

We also meet Gatomon as well as Myotismon who proceeds to absolutely pummel the chosen children’s partner Digimon.

Also, fun fact, the original Japanese version introduces a new ending song and animation where the Eighth Child is actually shown along with her Digimon partner. Oops.

So what were your thoughts on your rewatch of Digimon Adventure Episode 27? Let me know in the comments or in the discussion thread on /r/Digimon!