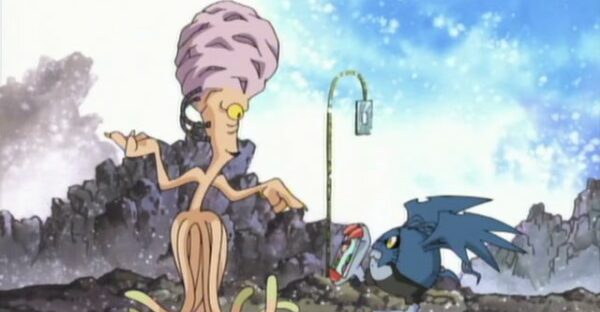 Next up we get an Izzy episode where he, for some reason, throws away his thoughts and emotions and becomes a robot obsessed with learning the alphabet.

“No Questions, Please”
(“Break Through! AtlurKabuterimon”)

Izzy and Tentomon are walking around and says it’s been two months. Izzy says they can’t afford to take a break. Izzy wants to find Gennai so they can get more information. They keep saying the word knowledge.

DemiDevimon is around and Myotismon is telling him to steal the crests, he sees Izzy and Tentomon.

Izzy and Tentomon keep seeing signs which direct them to walk a certain way, it’s all warnings about different types of ‘sludge’ (pink crap). They end up directed to a bottomless pit. A voice says that all that are greedy for information fall down the pit. Koushiro says that nothing is wrong with a thirst for knowledge. Koushiro is forced to give up his curiosity.

“Vademon is living proof that you should stay away from Digimon with unusually big heads.” Thanks Tentomon.

Vademon gives Izzy a book called “All you need to know” which he reads. They recieve the transmission from Tai which is weird because the dub tries to fix it “I got your message about being in danger!” so they try to fix it. Tentomon is getting depressed because It’s not the Izzy he knows.

Vademon says he’s a seller of curiosities and dreams. DemiDevimon shows up asking him if he saw Izzy. Vademon tries to sell him the curiosity but DemiDevimon just wants the tag and crest. DemiDevimon says he’ll sell him his curiosity, which Vademon is excited by because he’s a Digimon with many wacky thoughts.

Meanwhile, Izzy is spelling the alphabet with his body. Vademon appears and says that Izzy needs to throw away possessions, so Izzy gives away his crest. Tentomon says he can’t throw them away. Izzy continues spelling.

DemiDevimon tries pooping to give Vademon his thoughts, and Vademon kicks him out.

Tentomon devolves to Motimon and then to his baby form – Pabumon. Izzy yells at him, which is weird, having him get emotional. Pabumon tells him to remember and starts crying, his tears float away and we get flashbacks. Izzy tells him not to cry and apologises. Izzy says he has to come up with something. They are able to get through to the store room and retrieve the crest and curiosity. Izzy holds it to himself and he regains his curiosity. Izzy tells Pabumon to Digivolve, and Pabumon evolves without actual evolution clips to Motimon and then to Tentomon. Tentomon then evolves to Kabuterimon (with an evolution clip). Kabuterimon fights Vademon. Izzy yells at Kabuterimon to Digivolve, and he does – to MegaKabuterimon!

‘Hey Digimon’ plays as MegaKabuterimon defeats Vademon. Izzy and Motimon are outside and safe, Matt and TK show up, and then Gennai shows up to say that the connection between worlds is still bad and they can’t return home, but he provides Izzy with data for the analyser.

Myotismon is telling DemiDevimon off again and says that that was his last chance.

Rating for my Rewatch of Digimon Adventure Episode 24

This is a rough episode which gives us a rare insight into a Digimon’s feelings rather than their partner human; the viewer feels for and sympathises with Tentomon as he floats away, regressing to a tiny baby due to his heartbreak and depression rather than general weakness or being exhausted.

Similar to Tentomon’s first evolution where Izzy basically calls out ‘EVOLVE’ and his Digimon evolves, Kabuterimon is able to evolve with a similar command. Not sure why the other kids rarely try this (besides Tai, I guess), but it seems to work for Izzy.

It’s also worth mentioning that Izzy and Tentomon have such a great partnership.

So what were your thoughts on your rewatch of Digimon Adventure Episode 24? Let me know in the comments or in the discussion thread on /r/Digimon!