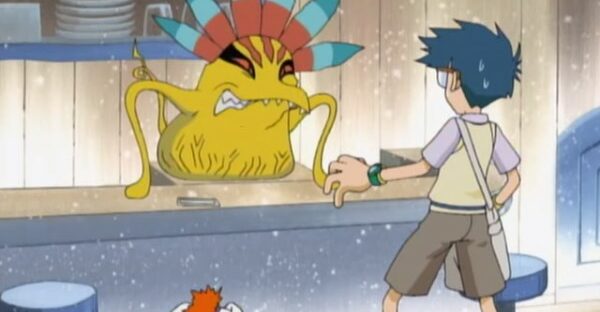 Wooo! Our next evolution episode!

This time Matt gets to realise the true meaning of friendship is not yelling at your friends when they’re trying their hardest.

Matt and Gabumon find a resturant where all Digimon are going. Vegiemon is working everyone really hard. Gomamon and Joe are working at the resturant. Matt says that everyone left him and TK and Joe explains that he got lost and a DemiDevimon told him to come to the resturant. Joe is currently working off a debt as he didn’t have dollar bills to pay with as he only has DigiDollars. The debt keeps on growing because the food isn’t good enough or Joe makes mistakes. Matt and Gabumon stay to help him work off his debt.

The resturant is owned by DigiTamamon. Weird moment where Matt seems to be narrating from the future “We didn’t know it yet…” which is weird because the episode is sort of in the present.

DemiDevimon has been bribing DigiTamamon to overwork. Matt is really annoyed by Joe but is trying to not take it out on him. Matt is thinking about TK the entire time.

Joe makes more mistakes and apologises and is so worried he’s falling apart. Matt is trying to stay calm. DemiDevimon is sabotaging him, but Sora and Biyomon are there to stop him.

Matt is playing his harmonica and DemiDevimon asks him if he’s worried about something because the music sounds sad, despite it being the same song he always plays. DemiDevimon says that Joe is making all of those mistakes on purpose and Matt doubts DemiDevimon because Joe wouldn’t do that, but Matt is convinced.

During work, Matt asks for time off to get TK, but he’s not allowed to leave. Joe earns them both another week each for breaking plates and Matt asks why he’s doing this. Joe says he was tripped.

TK and Tai show up. They talk to Matt. “We wound up in hot water” “OoOHH A cooKING joKE!?” What was that voice, Tai? Matt is really mad at Joe and says he only cares about himself and deliberatly gets them more time and then he blames Tai for getting them seperated (which, by the way, isn’t his fault).

DemiDevimon shows up and TK and Tai says he’s evil. Joe recognises him as the one who sent him here. DigiTamamon gets mad and attacks and says he’ll send them to the moon, which only Dynasmon has the ability to do, remember Digimon Frontier?

DigiTamamon can close his shell to protect himself. TK is in danger and Joe gets mad and wants to protect TK, so Gomamon evolves to save TK. Joe puts himself in danger and says how they’ll have to work together to get out of this. Matt realises how good Joe is despite the fact Matt yelled at him. Matt realises he needs all his friends. During the evolution scene Matt says ‘the Crest of Friendship’. WHO TOLD MATT IT WAS CALLED THAT?

WereGarurumon is here to give everyone a furry awakening as ‘Hey Digimon’ plays. After the battle, Tai congratulates Joe for his bravery and Matt says he’s proud and says he’s sorry.

DemiDevimon is taking to a Digimon called Myotismon and apologises that the Crest of Friendship activated.

Tai points out that everytime ‘this happens’ they find one of their friends, pointing out plot happening, nice work, English dub. However, there are two seperate Digivice signals. Matt and TK go one way, and Joe and Tai go another.

Rating for my Rewatch of Digimon Adventure Episode 23

This episode HURTS to watch if you feel for Joe at all – he’s trying his very hardest and nothing seems to go right, but I guess that’s the point of the episode.

It’s kind of weird that Joe’s crest didn’t activate in this episode in the same way that TK and Mimi’s crest activate without any evolution, but whatever, it’s a good episode, before watching I would give it a 3 or a 3.5, but hell, after watching it, it deserves a 4.

Also we get to hear ‘Hey Digimon’ for the first time, should give it a 5/5 rating just for that.

So what were your thoughts on your rewatch of Digimon Adventure Episode 23? Let me know in the comments or in the discussion thread on /r/Digimon!