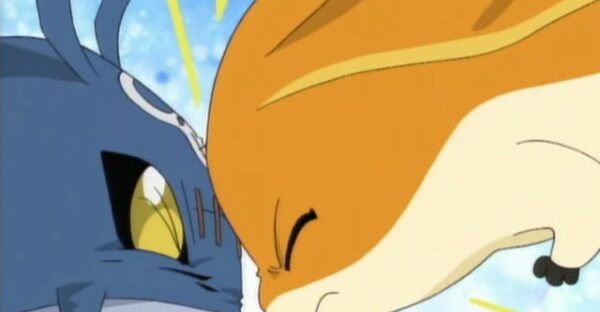 The ‘crest activation and explanation’ arc is probably my favourite arc in Digimon Adventure, despite the fact that my two favourite episodes are actually in the following two arcs and not this one and the fact that overall the episodes aren’t really that incredible in general.

When I say ‘crest activation’, I don’t mean the resulting evolution, as we have crest activations for most of the children in this arc, even if their Digimon won’t evolve into either of the following arcs.

This arc is where we learn a lot about the chosen and their individual flaws and internal struggles as opposed to each individual child’s strengths and, similar to how the last arc was focused on Tai’s struggle, this arc is focused on Sora’s struggle.

“Forget About It!”
(“The Small Devil, PicoDevimon”)

Take a shot everytime Tai says ‘DigiWorld’ in the recap.

Tai and Agumon are looking for everyone, he gets a reading on his Digivice that another chosen is nearby, they run towards the signal and find Tokomon, who is sad, but happy to know Tai is alive.

Tokomon explains that they had a fight and TK is with his new friend. There’s a flashback where all the other characters seperate and how TK and Matt found a theme park, where Matt left him to look around, but Matt never came back.

TK got emotional that everyone left, but then DemiDevimon showed up. Tokomon says he’s a bad Digimon. I love DeviDemimon’s voice. DemiDevimon said he found Matt and he said that he never wants to see TK again. Tokomon thought he was lying and DemiDevimon says it’s prejudice. TK got upset with Tokomon because he was mean to DemiDevimon and Tokomon left. Tokomon takes Tai and Agumon to TK.

TK and DemiDevimon are playing, but TK is worried about Tokomon. DemiDevimon leaves, and while he’s gone, Tai finds TK. TK asks Tokomon if he’s going to apologise and admit fault, which Tokomon refuses. Tai says they need to find the others, TK says they’re not nice because they all left.

DemiDevimon find Gazimon, who have found mushrooms of forgetfullness and they’ve forgotten all about Etemon, so I guess that’s that loose end tied up. Tai confronts DemiDevimon who denies everything and says he’ll take everyone to see Matt once they’ve eaten mushrooms. Tai says that they should cook them first.

Agumon has to go to the toilet first and sees more mushrooms where a voice (Sora) explains that these mushrooms will make them forget everything. Agumon runs to stop TK and Tai from eating, which he does. TK is mad and asks Tokomon for forgiveness. TK’s crest starts glowing and Tokomon evolves to Patamon to fight DemiDevimon. He defeats him as Patamon.

All is forgiven and Tai says that it’s all thanks to Agumon.

A shadow of the next big bad appears and DemiDevimon apologises and refers to TK’s crest as the Crest of Hope. So it’s the second crest to be named.

Tai explains to TK that Izzy is right and what happens in the Digital World impacts the real world.

Rating for my Rewatch of Digimon Adventure Episode 22

Ugh this episode and every episode like it annoys me. There’s a nearly identical episode in Young Hunters where the message is literally ‘yes, definitely judge books by their covers!’

What’s worse is that if Tai never stumbled upon TK and Patamon, they’d be still fighting, I felt like TK and Patamon didn’t really try to work things out until Tai came along.

By ‘episodes like this’ I mean where the partner Digimon and human have some dumb fight. I get that it’s meant to be heart wrenching and sad, but the fight is never particularly reasonable. We get another one with Patamon and TK in a few episodes time anyway.

I can only think of one season where I didn’t hate the ‘partner and Digimon argue’ episode; Digimon Tamers with the ongoing struggle between Ruki and Renamon, an ongoing personality flaw with Ruki which is part of her character arc and overall development.

Anyway, there are bits I like about the episode, and there’s a lot you can excuse because TK is only 8.

So what were your thoughts on your rewatch of Digimon Adventure Episode 22? Let me know in the comments or in the discussion thread on /r/Digimon!