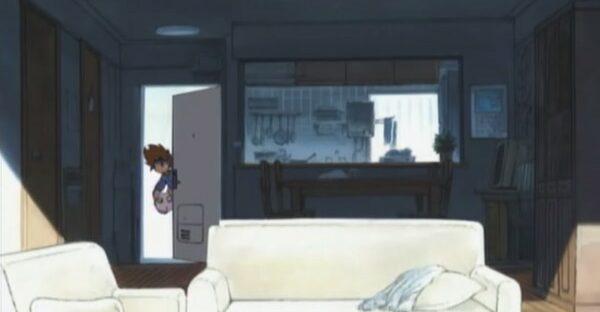 I intended to post this on Friday, but things got in the way, I’ve had it written since Wednesday though.

An in between arcs episode where Tai and Agumon are sent home. We meet Tai’s sister and get to see Drimogemon again – a true highlight.

“Home Away from Home”
(“Koromon, the Great Clash in Tokyo!”)

Weird narration at the start “Datamon knew Sora wouldn’t help defeat Etemon”. God that’s so wrong and then Tai says he’s not sure what strange world he’ll land in, despite the fact that he already landed there last episode and refered to it as home.

Tai narrates after the opening, which is weird, Tai says the opening to the Digital World must be the same, even though they’re not at the campsite. Koromon says he’s never been to the human world before. Tai wonders if they’re actually home, and freaks out a small girl by asking her if any of this is real. Tai tells Koromon to pretend to be a soccer ball.

Nobody is home. Tai wonders if he still exists. When drinking soft drink in the kitchen, he realises it’s still August 1st, which is the day that they left, but also the day where the family were going to see his Grandmother. Tai wonders if he has a twin in this world.

Kari is actually home because she was too sick to go with them. Kari knows Koromon’s name and Tai asks how, she doesn’t know how, she just thinks she’s met him before. Kari says that the campsite is where the DigiWorld is and Tai says she must’ve gone to camp, describes the plot of the movie Mirai, and then confuses himself and thinks Kari has a fever.

Tai calls the rest of the chosen to see if they’re home, but they’re all camp still. Tai wishes Izzy was here so he can work out what they do.

Tai says he’ll cook a healthy breakfast, because Omurice is eaten at any time but I guess omelettes are for breakfast in America. Kari asks him when he learnt to cook and Tai says Matt taught him at camp.

Koromon has to go to the toilet, and Kari says he should hang out in the bathroom to censor the fact he has to poop. Kari then tells a story about how much of a good brother Tai is and how he looks out for her. Tai misses being home and watching TV. The news announces that there are still freak events around the world, and Tai can see the Digimon. Kari is glad that she’s not the only one who can see them. Tai’s Digivice and all the electronics start to react weirdly.

Izzy appears on the screen and is telling Tai not to come back because of the danger and chaos – which ends up to be an error that the dub makes when we actually find out about Izzy sending this message in a few episodes.

Tai feels helpless, Kari tells him to relax and eat watermelon. Koromon eating watermelon is the purest thing. Kari tells Koromon he may be staying here for a while and he can live with them forever as he may never get back home.

The phone rings while Tai is sleeping. Kari answers, it’s their mother saying that she’s running late. Tai grabs the phone and probably terrifies his mother by saying her name and immediately hanging up. Tai says they should stay here forever, but then says he should help his friends but doesn’t know how.

Tyranomon shows up, and Tai runs off and tells Kari to stay put. A Drimogemon shows up too. The news presenter says that people are ringing up saying they see monsters, which is weird because Iori and Daisuke won’t see Digimon until the end of the season and Miyako won’t until Our War Game. So it must be Ken and Sam.

Ogremon is crossing the road, and Koromon is fighting him. Koromon can’t evolve but Tai can’t get the Digivice working, but he immediately can when Tai yells louder. Apparently. The dimensional rift opens mid evolution.

Ogremon and Agumon fight, but the rift is sucking Agumon up, who says he’s needed in DigiWorld and says goodbye. Tai yells for him to take him with him. Kari grabs Tai’s hand and tells him to stay. Kari knows he has to leave. Tai floats away so he can return, and Kari tells him to be careful. It’s a really sad moment which some heart wrenching music. Kari calls out for him to not forget about him.

Tai narrates the end and says how Kari will soon find her own way to the Digital World.

Rating for my Rewatch of Digimon Adventure Episode 21

I’m hesitant to give this one a full five star rating, but I can honestly think of only two or three other episodes that would be able to achieve it.

We also learn of Kari’s dependence on her older brother as well as her health issues and the fact she’s met Koromon before.

The dub does have a bit of a boo boo when Izzy’s lines don’t exactly match up to what he says in a few episodes time, but I can’t criticise an episode just for a small mistake in the English script.

So what were your thoughts on your rewatch of Digimon Adventure Episode 21? Let me know in the comments or in the discussion thread on /r/Digimon!

We are meant to be moving on to episodes 22-26 this week, however, there’s been fairly low engagement on reddit and elsewhere, so I’m debating whether it’s worth my time to continue this rewatch. If you are participating and enjoying it, please ENGAGE! Or else it will stop.

If you are following along, let us know your thoughts and what you think of the rewatch so far!