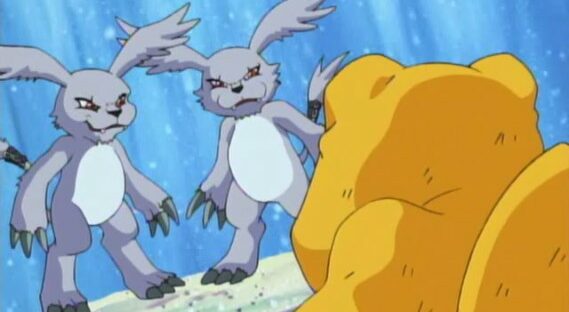 It’s time to meet the second big bad in Digimon Adventure and get some more world building going!

The Dark Network of Etemon”
(“Etemon! The Stage Mounting of Evil”)

It’s been five days since they left File Island, and the children finally arrive. Whamon told them that they should go to the Koromon village, so the children head off to the village. Agumon can smell Koromon. Once they arrive at the village, Agumon says something doesn’t feel right. Mimi wants a bath, and it seems that this village is a Pagumon village, the Pagumon then seem to kidnap her so the characters run off to save her. However, she was just having a bath.

Koromon is still unsure, because he was so sure it was a Koromon village. Sora is suspicious, but Tai trusts them for some reason and ignores Agumon and Sora’s suspicions. Poyomon evolves to Tokomon and then during the night the Pagumon kidnap him and torture him. The Pagumon are caught by some Gazimon, when the Pagumon mention the chosen children, the Gazimon say that one of them has to tell Etemon. A Gazimon runs off and we meet our second big bad – Etemon, a rockstar monkey!

Etemon is alarmed that the chosen are here already, and he says he has to teach them not to miss with him, because he’s the king.

Meanwhile, TK is looking for Tokomon with the other chosen. The Pagumon are also helping by telling them he’s not near the waterfall, which is where he is. Agumon is still suspicious, and can smell Koromon behind the waterfall. He follows the scent and finds Tokomon and some caged Koromon. Unfortunately, while he’s about to free the captives, Gazimon show up and attack Agumon. Agumon can’t evolve without Tai and Gazimon says that nobody can hear them under the waterfall, so Agumon starts firing attacks at the waterfall to make smoke signals, though it’s actually steam, thanks dub.

The children then find a Botamon, which is said to be the small egg Digimon that evolve into Koromon, and, judging by this, they immediately know the Pagumon were lying. Tai runs to Agumon, allowing Agumon to evolve into Greymon. Greymon scares off the Pagumon and Gazimon, but Etemon shows up. The rest of the Digimon try to evolve, but Etemon’s dark network can stop evolution and cause Digimon to deevolve. The Koromon take the children to a secret escape path, but it’s blocked by what turns out to be Tai’s crest, this clears the tunnel and allows everyone to escape. Tai is overcome with confidence that he has found his crest.

Rating for my Rewatch of Digimon Adventure Episode 15

Another fairly just okay episode, we get introduced to the new big bad, who is impossible to beat, and we get our first crest, which is really conveniently placed as a door to an escape exit.

So what were your thoughts on your rewatch of Digimon Adventure Episode 15? Let me know in the comments or in the discussion thread on /r/Digimon!