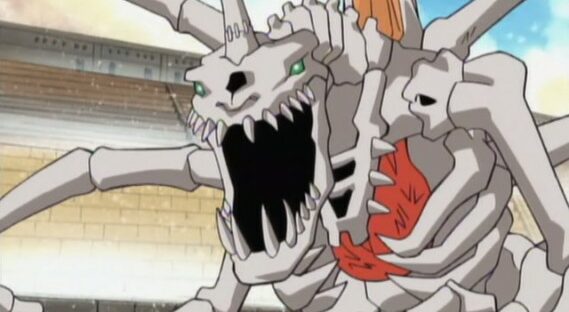 The start of what I would call a pretty decent batch of episodes, while it’s a fairly Tai-centric arc, we still have some great moments with other characters and learn more abotu the strengths and weaknesses of the cast.

The children are walking, and Sora is noticing how afraid everyone is. Tai tells everyone to cheer up and says that Agumon needs to evolve or else he’ll get a new Digimon. Izzy says that evolving will take a lot of energy and the human partner needs to be endanger.

Tai then starts force feeding Agumon despite Agumon’s discomfort. We then find out that all of this food is everyone’s food. Everyone is feeling pretty bad for Agumon. Izzy says that Tai used to be so friendly, especially to younger kids. Sora remembers him being selfless in the soccer team, and thinks about how whatever Tai does would be for the good of the team, but his personality has seemed to change since he found his crest.

Joe’s tag begins glowing, meaning his crest is near by. There’s a large stadium nearby, where the children decide the next crest must be.

Meanwhile Etemon is tracking the children and finds that they’re near the stadium where he wants to perform. He calls up a Gazimon and says how they should welcome the children.

Back at the stadium, they notice that the colosseum is like a Roman Colosseum, but has a soccer field setup and screens. The children and Digimon then decide to play soccer, so the humans explain soccer to the Digimon, which they start to play. Tai then yells at them for not helping finding Joe’s crest. Etemon appears on one of the screens.

The children are trapped in an electric net in one of the soccer goals. Etemon unleashes a Greymon to kill the children. Agumon digivolves to Greymon to fight the other Greymon. Tai yells at Greymon to evolve again.

Greymon in unable to Digivolve and the crest isn’t reacting at all. Greymon is a lot slower and burps instead of attacking. Etemon wants to launch fireworks from Gazimon, and Gomatmon calls his Marching Fishes to take the sparklers away from Gazimon. The children decide to dig a path to escape and Joe’s tag reacts again, leading him to wonder that they’re ontop of his crest, so he holds his tag to it, revealing another tunnel under the crest.

Thankfully, SkulllGreymon runs out of energy rampaging and deevolves to Koromon. Koromon feels awful about attacking his friends and apologises to Tai for letting him down. Matt is ready to yell at Tai, but Tai already feels awful and apologises, so Matt backs off.

Rating for my Rewatch of Digimon Adventure Episode 16

Our first case of darkness where we learn that Tai isn’t perfect and, while his intentions were good, isn’t a selfless person and can be stubborn, bossy, and cruel.

It’s a nice taste of branching evolution paths which only shows up a few times in the Digimon anime, but it’s still nice to see.

We also have a very short moment where we see Matt’s maturity; he is furious with Tai until he sees that Tai is completely aware of his own actions. It’s a quick moment but it’s a lovely one.

So what were your thoughts on your rewatch of Digimon Adventure Episode 16? Let me know in the comments or in the discussion thread on /r/Digimon!

In addition, what were your thoughts on this week’s batch of episodes?