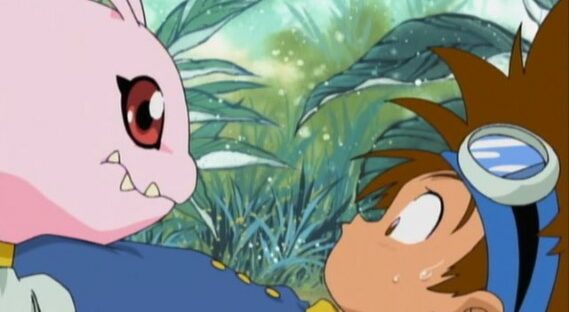 In the leadup to the Digimon Adventure Reboot coming in April, I’ve set up a rewatch of Digimon Adventure for the Digimon subreddit. This week, we’ll be watching and discussing the first six episodes and I’ll be (hopefully) reviewing each one by one. I’ll be watching the English dub, but feel free to watch any language if you decide on joining in!

First up, here’s my Rewatch of Digimon Adventure Episode 1 review!

I was surprised by how the English dub started out with so many small errors; stating that it was the middle of July (which we later find out to be incorrect half way through the season) and the how the dub writers seemed to have wanted the show to be set in America (“Aurora Borealis is in Alaska and we’re too far South…”).

We’ll also have another weird dub edition in Episode 3, but I’ll mention that when I get there.

There are a few incredible lines that the dub throws in, such as Joe commenting that he knew he should have brought bug spray or any of the random puns that were jammed into any silence. I really appreciate these dumb little lines, as the Japanese episode is actually comparatively boring.

Having said that, the fact that the characters keep saying ‘DigiWorld’ is somewhat weird – “How did we even get to DigiWorld” and I had completely forgotten the bizarre, Funniest Home Video-esque sound effects that were inserted.

Seven young kids go to camp for the summer and wind up in a Digital Land. Each of them meets their own Digital Monster – a Digital Friend.

We quickly meet the characters as introduced by Tai who immediately seems to be weirdly obsessed with Matt and calls him cool several times and then has the balls to say that Matt is a ‘self proclaimed cool guy’, despite Matt never saying that about himself.

After a sudden snow storm, where all the non-chosen children sensibly run inside, the characters that Tai conveniently introduced to us earlier are given strange devices from beans of light and are then transported to a different world.

Each child meets a small, primarily round, friend that says that they were waiting for them, the children all take this surprisingly well except for Joe who appears to be the only reasonable character who is appropriately terrified of the monsters and sudden transportation.

The children are then harassed by a giant red beetle – Kuwagamon. Instead of running, the Digimon want to protect their human partners, which most of the children, try to stop. Mimi, on the other hand, is the only one to call out ‘be careful!’ to her Digimon rather than ‘stop!’. Mimi is a baller.

The Digimon are unfortunatly to weak to defeat Kuwagamon, but they are evolve to protect their human partners.

Their peace is short lived, however, as Kuwagamon breaks the cliff-face that the children are standing on and the episode finishes on a literal cliff hanger.

Or, cliff faller, rather.

Rating for my Rewatch of Digimon Adventure Episode 1

So what were your thoughts on your rewatch of Digimon Adventure Episode 1? Let me know in the comments or in the discussion thread on /r/Digimon!

I’ll be posting about episodes two to six this week and we’ll be moving on to episodes 7-11 next week. If you follow along or are planning to, please let us know!