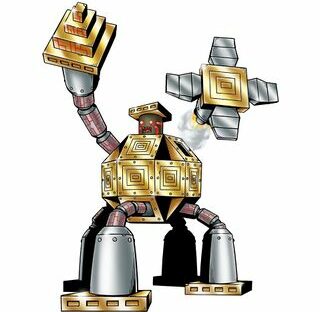 It feels like it’s been a while since I gushed about a Digimon from Digimon World 2003 (or maybe not, was Sabedramon the last DW2003 Digimon I mentioned?), so it’s time to gush over it again!

Valvemon is, what felt like, the first ‘boss’ in Digimon World 2003, and it was definitely the first challenge for me when I first played the game. Valvemon was actually given the name of ‘Bulbmon’ in the English release, which I would assume was a misreading of Barubu (バルブ).

I also remember reading ‘Bulbmon’ and confusing him with ‘Boltmon’ for some reason, so I was really worried about facing a fully evolved Digimon so early in the game. I was fairly surprised when I saw a Digimon I had actually never seen before.

However, despite the fact that Valvemon debuted in 2002, he has only appeared in one anime season (Xros Wars) and he’s never really appeared in a virtual pet (only the D-Spirit). Which is kind of sad because I kind of like his design; he looks like he should evolve into Apocalymon. Maybe we’ll see him in Kizuna or the Adventure reboot.

So who is the most nostalgic Digimon that starts with the letter ‘V’ in your opinion? Let us know in the comments!