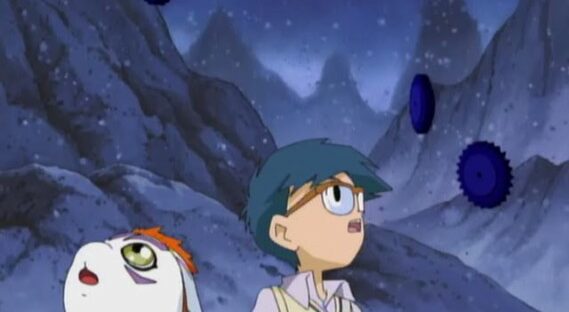 I’m ready to cover the Joe episode since he’s basically been the only reasonable character in the season so far, so it’ll be nice to see a Joe-centric episode.

These first evolution episodes are when we really start to get the individual unique traits hinted at, so it’s always nice to watch through older episodes knowing their entire character arc.

Firs of all, a big ‘UGH’ for the recap from Mimi with her say ‘like’ twice per sentence. This characterisation doesn’t last the entire English dub, but it’s still annoying.

The chosen are walking through snow this time instead of a desert and Joe is worried and Gomamon is telling him to stop worrying so much because he’s stressing everyone out and everyone is so cold.
There’s a cute discussion about snow activities and the Digimon just want to eat the snowballs and igloos.
The children wonder if they should cross the snow field or the climb the mountain.

They smell steam coming from a hot spring and they want to take a bath, but it’s too hot.
Digital World weirdness happens again and the kids see fridges that are full of eggs. Thankfully not DigiEggs.
They all decide to eat the eggs and Joe is pretty upset that they’re stealing food and also just in case somebody gets sick because there are no doctors.
Joe continues to be really reasonable and everyone is awful to him.
Joe makes everyone sad by mentioning home.
Izzy says that it’s been four days.
Joe then gets annoyed about everyone liking different types of eggs, but it’s clear that it’s not the main reason he’s stressed out.
Matt says Joe isn’t being himself, which is incorrect, he’s being very himself. Joe essentially has an anxiety attack and all the other children and Digimon tell him that he’s crazy.

Matt and Tai are fighting about what to do next and if they should climb Infinity Mountain. Tai says he’d have a great view of the island, but Matt says it’s too dangerous. Joe sees both perspectives to be reasonable. Matt calls Joe unreasonable, which is incorrect. Sora breaks up the fight and they all decide to sleep and take cover in the cave for the night.

Joe wants to climb the mountain while everyone else is asleep, but Gomamon catches him and follows him. Gomamon says it’s unrelated business.
There’s a cute line about Gomamon not having hands which I appreciate during this climb.
While they’re climbing, black gears shoot out of the mountain and hit a Unimon.

Sora wakes up and notices that Joe is missing so she wakes everyone up because she believes Joe went to climb the mountain alone.
Unimon is attacking Gomamon and Joe, despite being a gentle Digimon as Gomamon tells us earlier.
Birdramon shows up with Sora, Tai, and Agumon, but is defeated, so Agumon evolves, but is also defeated.

Rating for my Rewatch of Digimon Adventure Episode 7

STOP MAKING FUN OF JOE.
Weird thing in the English dub, when Agumon evolves, he says ‘Agumon Digivolve INTO’, it’s weird different audio, like they lost a previous copy of the stock audio.

Anyway, the overall episode is fairly solid, but, again, I can’t rank any of the early episodes too highly as the episodes do get better (and worse).

So what were your thoughts on your rewatch of Digimon Adventure Episode 7? Let me know in the comments or in the discussion thread on /r/Digimon!

One thought on “Rewatch of Digimon Adventure Episode 7”