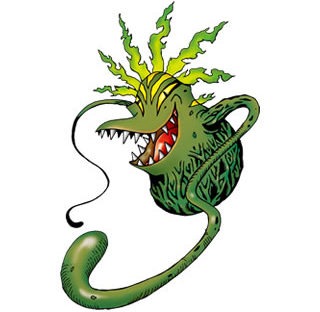 It’s Zassoumon again! I mentioned Zassoumon as a dumb Digimon design, but he’s also fairly nostalgic for me due to his appearance as Weedmon in Digimon World.

Whenever I tell my non-Digimon fan friends about Zassoumon, they all think he’s some shit post fanart created for a meme, but it’s actually an official shit post.

Zassoumon/Weedmon was originally a darker colour and resembled a dried up plant, but over time he became a danker, brighter green for some reason. He appeared in a few Playstation games as this darker colour.

By the time the Digimon Story games came out on the Nintendo DS, Zassoumon was the bright, almost fluorescent colour we know him as today.

So who is the most nostalgic Digimon that starts with the letter ‘Z’ in your opinion? Let us know in the comments!

That’s also it for our ABCs of Nostalgic Digimon series, I have a few more ABCs Of…planned, so I hope you enjoy these types of blog posts!