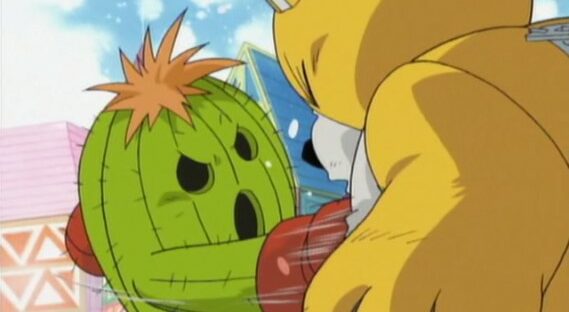 After complaining for most of the episodes, we finally get a Mimi-centric episode. Though this episode does some fairly weird things making her the main character, mainly making her narrate the episode in past tense. This has never been done before and is never done again.

I knew this going in, however, I apparently had forgotten just how weird these additions were for the rewatch of Digimon Adventure episode 6, my fault for watching the English dub, I guess.

After the title, Mimi gives an intro saying she found a secret admirer and she also calls this place ‘Digimon Island’.

The children are singing a song that Agumon wrote (It’s them playing Shiritori in the original). Sora starts crying because she’s reminded of singing at home. All the children talk about what they miss, Tai misses sport, TK misses games, Matt misses steaks, Joe misses homework, Mimi misses vacation and drinking a cold drink at the beach, and Izzy misses accessing satellites to look at stars and planets.

Their Digimon partners feel kind of bad, but then Numemon show up. Numemon are weak but smelly and there’s a lot of them, so the group try to get them away.
Tai wonders why they have to run if they’re weak, and Agumon says that he’ll find out.
Mimi reads the Digimon Analyser and says that they throw ‘Nume Slime’.

The children get out of the sewer as the Numemon are scared of the sunshine. Mimi is still narrating, which doesn’t fit previous episodes.

The children stumble upon vending machines but Mimi wants to try getting them to work. Mimi asks Palmon if she wants a soda and Palmon replies pretty rudely which offends Mimi.

Numemon was in the vending machine and Mimi starts insulting it for asking her out, he gets mad.

When escaping from the Numemon, the children split up.
Monzaemon shows up and scares off the Numemon and then tells Mimi to visit toy town which is where he takes care of all the abanddoned toys.
Monzaemon then starts attacking and Palmon says he never acts like this, which is a staple of the black gear arc. Numemon says that he’ll protect Mimi and they hide with Numemon.

Mimi decides to go to toy town to work out what’s going wrong there. Which is a pretty brave move.
Mimi finds Tai and the others who all appear to be brainwashed into having fun playing with toys.
Mimi says they’re acting strange, but says that they were always a little strange.

Mimi finds the Digimon partners trapped in a box and they explains that Monzaemon caught them and brainwashed the kids as they were unable to fight back. The Digimon then say that Mimi and Palmon have to be the heroes as they can’t get out of the box until Monzaemon is defeated and the other children are rescued.
Palmon says that Monzaemon’s attack usually just makes people happy to help others.

Mimi gets mad and yells at Monzaemon, Mimi being mad is basically a main point for every Mimi focused episode, which is great, especially when the dub makes her so thick.

Numemon still try to help to save Mimi even though Mimi turned them down. Palmon wants to help them as the Nume Sludge isn’t doing anything, but Palmon’s attacks don’t work either.

More Numemon show up to help, Palmon says that she’s a lady but not a push over and then evolves to Togemon, she has a line in the middle of her evolution too: ‘time to show this Digimon some manners’. Togemon, with her new evolution buff, beats Monzaemon, and when she dedigivolves, she says her stem is bruised.

Monzaemon then explains that these are all abandoned toys that he feels bad for and just wanted them to have fun. The black gear was making his good intentions evil.
Monzaemon gives them all a ‘heart attack with a hug’ which makes them all giggle.

Numemon still wants a kiss, but Mimi rejects him.

Rating for my Rewatch of Digimon Adventure Episode 6

I’m cautious about rating anything early on too highly as I know episodes get pretty great early on, but it’s nice to see some focus on Mimi, who has previously just been a fairly annoying character in the English dub.

Episode 6 has a strange and eerie feeling from the start of the episode to the end which sets it out from the previous episodes which remained fairly formulaic.

This episode also does some weird things like the narration and the mid-evolution line from Togemon. Also Togemon calls her attack “Digimon Needle Spray”.

This episode is the second appearance of a perfect level Digimon, however, this time, it’s a 1v1 fight. Thankfully, Togemon is a Data type Digimon, which is strong against Monzaemon’s Vaccine typing compared with the last episode, where both Kabuterimon and Andromon are Vaccine type Digimon.

So what were your thoughts on your rewatch of Digimon Adventure Episode 6? Let me know in the comments or in the discussion thread on /r/Digimon!

We’ll be moving on to episodes 7-11 next week. If you are following along, let us know your thoughts and what you think of the rewatch so far!