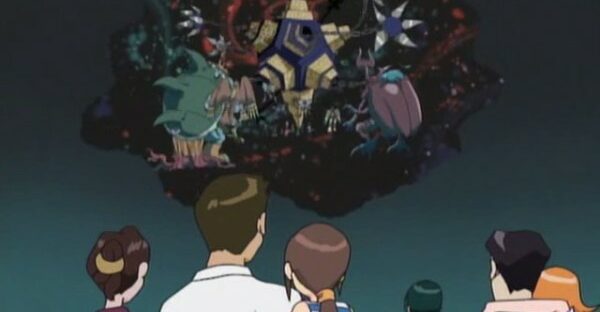 Here we are, the last two episodes of Digimon Adventure!

I remember finding out that there was ANOTHER big bad and being so shocked and surprised. It’s one of those experiences we can’t live through again. Despite having re-watched this episode so many times, I can still remember how I felt the first time watching this episode.

The chosen are falling into darkness as we saw at the end of the last episode. Suddenly, they stop in midair. Gennai contacts them and informs them that there was actually a group of chosen children before them that had defeated an ancient evil, which has more or less returned. Conveniently, the aforementioned evil shows himself at this moment.

The evil’s name is Apocalymon and he reveals that he was created from all of the pain and suffering when Digimon fail to evolve and end up dying and how much hate he has for the chosen as they’re happy and their Digimon have all been able to evolve. Apocalymon is able to attack them with all of the abilities and attacks of the previous bad guys.

Apocalymon then uses Etemon’s ability to revert the chosen Digimon back to their standard forms (as in, Rookie/Child level + Gatomon). When the Digimon try to Digivolve, Apocalymon destroys the Crests of the Chosen.

The chosen are all losing confidence with the loss of their Crests, which Apocalymon is able to use to trap the chosen children in a world of binary data. The children are completely hopeless, but their partner Digimon encourage them by reminding them of all their achievements and everything they’ve been able to overcome so far, helping the children realise that they’ve grown and become strong.

These realisations make their crests grow from inside them as we learn that they never really needed the Crests as they already had the power of their Crests inside their hearts. This allows the Children to evolve their Digimon to their highest forms and return from the binary data world to fight Apocalymon.

Rating for my Rewatch of Digimon Adventure Episode 53

By far the most emotional part of this episode was the moment where the screen zooms out and you can see that the families of the chosen are watching (in real time, mind you, so ignore that). This moment reminds me of when the families of the Tamers in season 3 are able to see that their children are actually inside their partner Digimon and are fighting. It’s a truly emotional moment in both seasons and such a huge realisation for their families.

Gosh the ‘oh the power was in us all along’ cliche is a little wet though.

So what were your thoughts on your rewatch of Digimon Adventure Episode 53? Let me know in the comments or in the discussion thread on /r/Digimon!