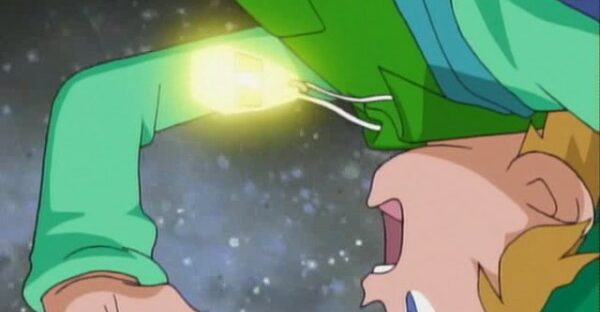 If it even counts as MagnaAngemon defeating Piedmon since he doesn’t even check to confirm the kill and it’s more or less just an assist with MetalGarurumon and WarGreymon.

MetalGarurumon and WarGreymon are fighting Piedmon and appear to look like they’re about to win when Piedmon reveals a white cloth which enlarges to become a huge sheet that covers WarGreymon and MetalGarurumon and causes them to turn into key chain figures. The children escape while Andromon holds Piedmon off, resulting in him too being turned into a collector’s item.

The group must traverse a large chasm to get to safety, however, Joe, Izzy, and Tentomon are captured. Shortly after, Garudamon and Angewomon are captured to when holding off Piedmon.

Sora leaves Kari in TK’s protection (which is dumb because they’re the same age but whatever boys protect girls, lesson learns, thanks Digimon). TK, Kari, Patamon, and Gomamon try to flee, but Gomamon elects to stay and protect Sora. Sora tells him he won’t be able to fight, however, before he can leave, Piedmon appears. Gomamon is able to grab the figure of Matt, who passes it to Sora, who is able to throw it to TK before she too in turned into a keychain.

TK and Kari try to escape up a rope, but are caught up to by Piedmon. Patamon evolves to protect them but is easily defeated. Piedmon grabs onto TK, and TK tells Kari to let go. However, Piedmon cuts the rope anyway, causing the two to fall.

While falling to his death, TK hears Matt’s encouraging words coming from the keychain, reminding him to have home which makes his crest to react, causing Angemon to finally evolve to MagnaAngemon, who is able to save TK and Kari from falling to their deaths.

MagnaAngemon is able to slice the white cloth in half when Piedmon throws it at him. He then retrieves the keychains of the chosen and sends Piedmon hurtling away into the unknown.

Thankfully, MagnaAngemon has a skill called ‘Magna Antidote’ which specifically rejuvenates and restore Digimon and children who have been turned into Digimon. Handy.

Piedmon returns with Vilemon, which, of course he does because nobody did a body check. Mimi and Lilymon finally return with an army of Digimon (see, if Mimi and Lilymon were here the whole time, Piedmon would have died earlier). All of the Digimon fight against Vilemon and finally MagnaAngemon banishes the horde with his Gate of Destiny attack. WarGreymon and MetalGarurumon are able to finally yeet Piedmon into the void as well, apparently defeating him.

The last part of Spiral Mountain dissolves, restoring the world, and Mimi’s army are able to return, despite not really doing much. Izzy gets a message from Gennai who decides to bring up important information at the last minute again and informs the children that the Dark Masters were never really the real enemy and the real enemy created the Dark Masters.

Conveniently, once he’s done explaining, the ground shakes and the sky grows dark and the episode ends. Because of course it does.

Rating for my Rewatch of Digimon Adventure Episode 52

I still love this episode, despite the weird evolution music in the English dub that gives HolyAngemon the ‘warp Digivolve’ background announcement.

The episode is fairly exciting and well paced as the children are turned into key chains one by one. It’s emotional and daunting.

So what were your thoughts on your rewatch of Digimon Adventure Episode 52? Let me know in the comments or in the discussion thread on /r/Digimon!