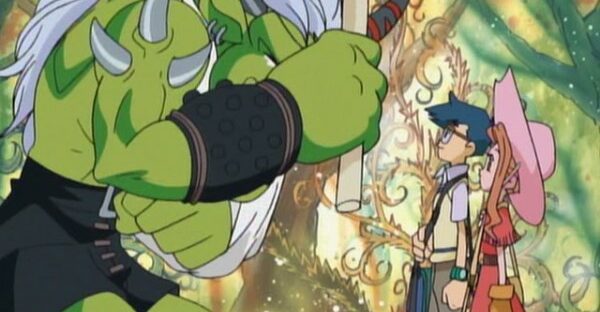 This episode and the next episode serve as a cute little ‘where are they now?’ for Digimon that we’ve previously seen. I remember both of the episodes being okay, but I can’t remember much about them.

We get to see Ogremon being chased by a Woodmon (not sure why he’s not beating it up but whatever). A meteor crashes near him, which attracts the attention of two of the groups of chosen children (Joe and Mimi and Tai’s group).

Meanwhile, after finding out that the meteor was actually MetalEtemon, Joe and Mimi find the injured Ogremon. Mimi, being the best, immediately decides that they should help Ogremon, despite Joe being reluctant. MetalEtemon appears and quickly and easily is able to defeat Zudomon, as Mimi is hesitant on having Palmon fight.

However, MetalEtemon then appears which annoys Puppetmon, causing the two to fight, which allows Mimi and Joe to escape.

Ogremon is grateful for the chosen’s help and vows to repay them somehow. Mimi asks why he fights Leomon, and Ogremon says it’s destiny, to which Mimi replies with a question wondering why he doesn’t have a greater purpose, upsetting Ogremon.

During this time, MetalEtemon discovers Joe and Mimi. Fortunatly, however, SaberLeomon appears.

Meanwhile, Tai’s group has arrived at the mansion and start fighting Deramon (the best) and Floramon (a underrated favourite). However, the two Digimon admit to not liking Puppetmon and decide to show the children around the mansion. However, Puppetmon arrives and the group prepare to battle.

Rating for my Rewatch of Digimon Adventure Episode 46

An ‘OK’ episode where we reunite with some old favourites and Mimi continues to be incredible and caring.

So what were your thoughts on your rewatch of Digimon Adventure Episode 46? Let me know in the comments or in the discussion thread on /r/Digimon!