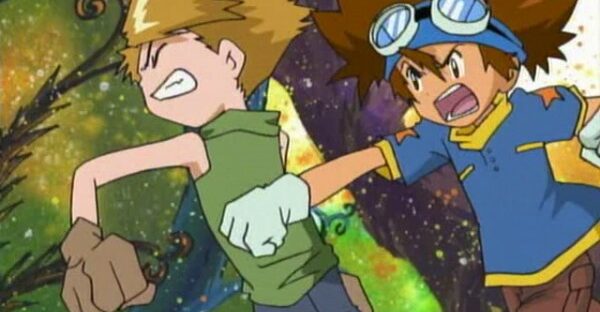 I can always tell that I may not like an episode or episodes when I sit down to write my opening thoughts and feel the need to discuss how an episode is always combined with the preceeding episode in my memory.

Anyway, I always feel that episodes 44 and 45 are one combined episode in my mind.

“The Ultimate Clash”
(“Clash of the Ultimates! WarGreymon vs. MetalGarurumon”)

Tai gets Agumon to warp evolve to protect him from the threat of his friend and his giant metal wolf murdering him because a deceased tree told him too.

Puppetmon is watching and his having a great time watching them murder each other – remember, in the Dark Master’s introduction episode, Puppetmon made Tai’s Digimon and Matt’s Digimon fight. Foreshadowing? In Digimon? Nah probably a coincidence.

During all of this, Kari walks off, because of course she does, and starts talking to an invisible presence who then possesses her and reverts WarGreymon and MetalGarurumon to their In Training forms.

The children learn, again, that this is the moment they were chosen when they saw Parrotmon and Greymon fight. They are then taken to a room of hooded young Gennai are taking care of the chosen children’s Digi-Eggs, crests, and Digivices. They watch the eggs, crests, and Digivices being attacked and stolen by Mekanorimon and Piedmon. A young Gennai rescues the eggs but loses Gatomon’s egg. He puts them on File Island where they will wait for the chosen.

Oh and Gennai totally gets a dark seed implanted in his back by Piedmon but we just ignore that and so will Kizuna and Tri, I guess.

The children are returned to the Digital World present day and they basically all decide to split up and go their own ways despite just pretty much being told they should stay together and the fact that nothing good has ever happened when they’ve been split up. Except for Mimi becoming a Princess. She deserves that.

Rating for my Rewatch of Digimon Adventure Episode 45

Better than the last episode and we get some cool lore about how the chosen were chosen. However, imagine if you watched this along its original run in Japan and how this is the THIRD time you’re seeing the darn Parrotmon vs Greymon fight.

So what were your thoughts on your rewatch of Digimon Adventure Episode 45? Let me know in the comments or in the discussion thread on /r/Digimon!