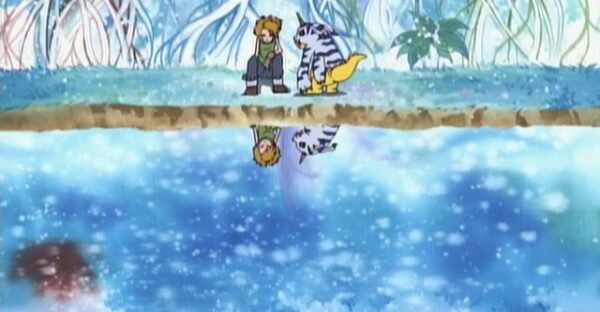 Episode summary: MATT GETS CONVINCED TO MURDER HIS FRIEND BY A TREE.

Matt leaves the group because he feels unneeded and unwanted; he feels TK has grown and no longer needs him and that’s basically his whole character so he has identity issues now.

Everyone notices Matt is gone but Joe tells everyone not to worry as he just left on his own. Y’know for some unexplained reason, yeah, don’t worry about that. Nice friends ya got there, Matt.

Kari starts hearing voices and nobody really takes her seriously despite the fact that hearing voices wouldn’t be the strangest thing that has happened in 44 episodes.

Matts hangs out by a lake trying his best to look as broody as possible and is thinking about how his character arc was just looking after TK and now he has no character arc.

Cherrymon shows up and convinces Matt that Tai is holding him back and also convinces him, despite not really covering about Matt’s feelings of being no longer needed by TK as an older brother, that he should kill Tai. OK Boomer.

Meanwhile, Mimi throws Poo at the bad guys instead of running away from them.

By that I mean that Garbagemon and Puppetmon show up and fight the chosen children and we finally see how Mimi has grown and it’s fairly incredible and probably the only enjoyable moment in this entire episode. It’s a ten year old girl catching and flinging poo at a monster that shot it at her and somehow THAT makes more sense than anything else in the episode.

Anyway, the Digimon evolve to Perfect and Puppetmon flees. Again, something fairly surprising since we already saw Puppetmon can defeat all eight of them.

After Cherrymon tells Matt he has no friends, he says the same thing to Puppetmon, causing Puppetmon to be a better guy than Matt and kill Cherrymon; something that apparently never crossed Matt’s mind despite knowing that Cherrymon is a bad Digimon (because the analyser told us so).

The other children are somehow struggling fighting Garbagemon so MetalGarurumon shows up to defeat the Garbagemon and challenge Tai for a battle to the death because a dead tree told him to.

Rating for my Rewatch of Digimon Adventure Episode 44

I don’t like this episode because of how Matt heel turns so violently all because a tree told him to – his reasons for being emotional are well written and built up from the entire season, but the execution is so poor.

Matt’s emotions are relatable, and yet, this episode is so bad.

The only reasonable character in this episode is Mimi as she finally realises she’s had enough and uses the fact she’s wearing gloves to her advantage.

So what were your thoughts on your rewatch of Digimon Adventure Episode 44? Let me know in the comments or in the discussion thread on /r/Digimon!