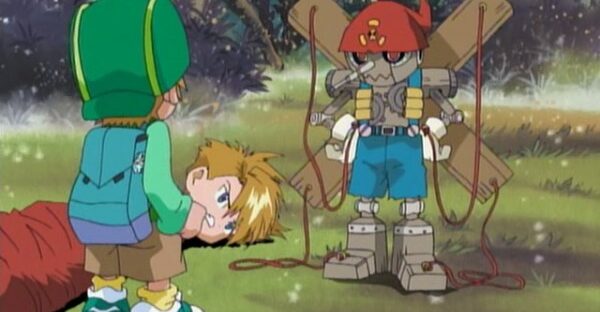 Here we are at an episode I’ve previously said is the absolutely best episode of Digimon Adventure, in addition to this, I’ve mentioned that is was probably the first episode of Digimon I ever actually watched. So I’ll try not to go over too much of what I’ve covered in blog posts in the past.

Anyway, let’s see how this episode holds up!

Tai is ready to continue on to the next Dark Master, but everyone is still mourning the loss of Whamon and other Digimon that have been killed.

The chosen eventually head into the forest, Puppetmon’s territory, where Kari begins hearing a voice that nobody else can hear and everyone quickly dismisses her.

Puppetmon splits up the group using moving conveyor belts in the forest and by moving around voodoo dolls of the chosen.

Puppetmon approaches TK and Matt and TK agrees to play with Puppetmon to save the others.

Meanwhile, Kiwimon fights the children but is easily defeated by Biyomon, which angers Matt because he’s worried about TK.

However, TK is doing really well and is outsmarting the terrifying and murderous puppet. He finds Puppetmon’s map as well as the voodoo dolls and returns to the group who praise him for his thinking, which upsets Matt and makes him feel unneeded, causing him to leave the group.

Meanwhile, Puppetmon realises that TK has tricked him and escaped, angering him.

Rating for my Rewatch of Digimon Adventure Episode 43

As with ‘Flower Power’ this episode holds up as a pretty great episode.

I love Derumon and all the Wind Gaurdians that show up too in this ‘arc’ in general.

Puppetmon is a great villain, as I’ve mentioned in a post recently; he’s somewhat sympathetic and enough so that you feel sorry for him, but he isn’t too sympathetic that you want him to succeed in his goals. it’s a good balance and it’s done fairly well.

So what were your thoughts on your rewatch of Digimon Adventure Episode 43? Let me know in the comments or in the discussion thread on /r/Digimon!