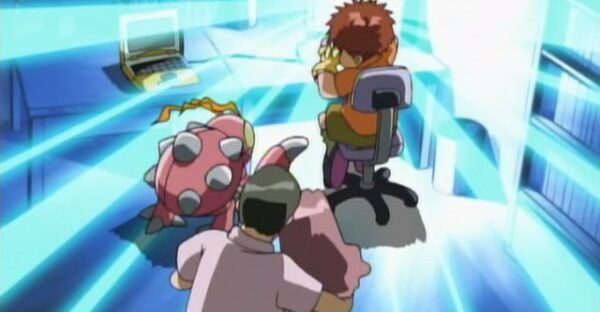 It’s time for another evolution episode, and it’s a Joe episode, so Joe is bound to do something borderline suicidal.

“City Under Siege”
(“Break through the Barrier! Zudomon Spark!”)

Lilymon is unable to defeat Myotismon on her own, but really does a great job and I’m very proud of her in any case. Birdramon rescues Lilymon and they fly off.

Meanwhile, Tai decides to help the others and leaves Kari with Matt after they discuss what’s going on. Kari feels guilty that it’s all her fault.

Elsewhere, Izzy sets up a Digital Barrier to protect himself and his parents from the intruding Bakemon. There’s a nice moment when his Dad tells his wife to trust their son to stop her from pulling Izzy away from his computer. This reveals Tentomon to his parents. Izzy leaves as he has to help the others.

Gatomon is being made to go through children and tell Myotismon whether they’re the eighth child or not.

TK finds Joe at the harbour on the other side of the bay and Gomamon evolves to Ikkakumon to act as a ferry. TK’s Mum is fairly terrified and thinks about how “now she’s lost all of them now”, because clearly losing a child to divorce is the same as losing a child to a sea monster.

Izzy leaves to go to the source of the fog – the TV station. His Mum is so proud of him.

Tai, after beating up a Bakemon who is complaining about his job, reunites with Sora briefly so Tai can tell her where Matt is, they split up so Tai can reach the convention centre and save his Mum.

Kari is asking Matt questions about everyone being safe and bursts into tears when he says how Tai’s just one kid going against an army.

Meanwhile, a MegaSeadramon attacks Ikkakumon, making Joe and TK go for a nice late summer swim. Joe sacrifices himself to ensure TK is safely floating (Joe can’t swim as he’s been reminding us constantly for nearly 40 episodes) because he promised TK’s Mum he would. This activates Joe’s crest for the first time (he was the only one who hadn’t yet had his crest glow) and Ikkakumon evolves into Zudomon, who is able to rescue Joe and TK as well as defeating our monster of the week.

I like how they mention how he’s the evolution from Seadramon like the one they saw at the start of the show, it’s nice when they address evolution lines. However, I don’t like how, when Ikkakumon evolves, Patamon says he was wondering when Zudomon would show up, despite it seeming that Digimon don’t know their future evolutions.

Zudomon then finds Wizarmon who has been floating in the water for two episodes (probably at least 12 hours), who is holding Kari’s tag and crest.

Say hello to Tuskmon, and watch out—avoiding his razor-sharp horns is no easy ‘tusk’. Heh heh…sorry.

Snimon, a deadly praying mantis Digimon. Which is so appropriate, because you’re all about to become his prey.

Birdramon evolves to Garudamon and there’s a huge fight, but it’s all pointless because Kari gives herself up because she’s never seen Digimon fight before (or, maybe, because of Phatomon’s amazing incredible ‘No easy tusk’ line).

I like how Phatomon says Kari has a ‘refreshingly helpful attitude’.

Rating for my Rewatch of Digimon Adventure Episode 36

Like the previous episode, episode 36 provides us with character moments and additional family dynamics as well as interactions and relationships between chosen that we haven’t really seen much of.

Joe drowns again, by the way, which he last did in ‘The Dancing Digimon’, which was also referenced last episode as well as the last episode’s recap we see at the start of this episode.

It’s also weird how this arc has Digimon being referred to as ‘fully evolved’ at the Ultimate/Perfect level.

So what were your thoughts on your rewatch of Digimon Adventure Episode 36? Let me know in the comments or in the discussion thread on /r/Digimon!