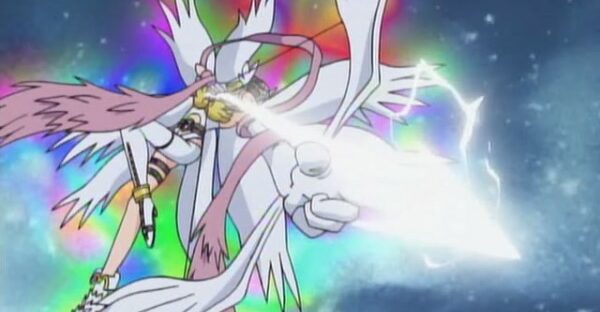 It’s arc climax time! Once again, the Japanese title gives us a spoiler.

Besides Wizardmon dying, I don’t really have many thoughts about this episode going into it.

Matt is blaming himself for losing Kari to Myotismon, because obviously he’d blame Tai if he was there, but he isn’t, so I guess he’s confused. Sora tries to make him feel better and they go off to find Kari.

Tai mistakenly says his parents are at the convention centre when the last episode said it was just his Mother.

Myotismon puts everyone to sleep at the convention centre now he has Kari, but Mimi’s crest wakes her up.

Agumon evolves to Greymon to beat up Bakemon and rescue Mimi at the convention centre while Izzy explains to Matt’s Dad and coworkers that not all Digimon are bad, however, didn’t Matt’s Dad already know of Gabumon somehow.

Meanwhile, Joe and TK find out about Kari and Gatomon being the eighth chosen pair from Wizarmon and they too go off to where Kari and Myotismon are. Joe is a little slow on the uptake and TK says that they’re always the last ones to find out, not sure how he knows that he’s the last to find out (though I don’t think Mimi and Lilymon know yet).

Wizarmon is able to restore Lilymon and the group is reunited! Everyone gets details about Kari and Gatomon.

Gatomon refuses to look at Kari and say she’s the eighth child until DemiDevimon hurts Kari and Gatomon exclaims her name. The chosen all show up eventually to fight Myotismon but immediately lose despite all evolving to ultimate/perfect.

Patamon evolves for the third time ever actually manages to hurt Myotismon – “HAVE YOU HAD ENOUGH OR DO YOU WANT SOME MORE??!?!?”. This annoys Myotismon, who decides it is time to actually try and murder a child, which Wizarmon disagrees with by getting in the way of the attack.

Thankfully, seeing Wizardmon die causes Kari’s crest and Digivice to activate. DemiDevimon drops the Digivice and Tai catches and then yeets it to Kari as if it’s a Pokeball. Gatomon evolves to Angewomon, showing the audience to just ignore logical evolution paths.

Gatomon is an angel?

Kari and the audience

Gatomon evolving and how she talks to Myotismon is very similar to how Patamon evolved and how he talked to Devimon.

Everyone celebrates, despite the fact that the city is falling apart, until they realise that Myotismon’s fog remains.

Rating for my Rewatch of Digimon Adventure Episode 37

Sorry TK, the new kid gets a new evolution before you do, also the Japanese title for the episode should really be ‘Perfects (featuring Angemon) attack together’.

Also, you ever notice that Wizardmon dies probably as much as Leomon but nobody makes the same joke about Wizardmon?

Also remember when he showed up in Tri? Me neither.

So what were your thoughts on your rewatch of Digimon Adventure Episode 37? Let me know in the comments or in the discussion thread on /r/Digimon!