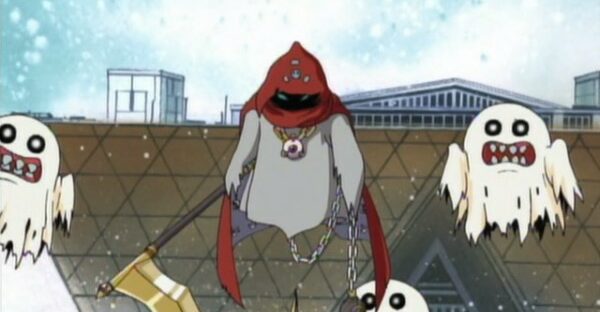 I’ve mentioned this episode so many times throughout my blogging and podcasting of Digimon – Flower Power is one of the best episodes of Digimon Adventure despite the fact that Lilymon doesn’t actually do much in the episode, it’s still a genuinely enjoyable episode.

Let’s see how it holds up.

Myotismon’s fog surrounds Odaiba, which causes a disruption to all forms of digital technology (including public transportation).

“Took her under his grisly wing” is the best line ever that Tai delivers in the recap.

Also “Not in fire or ice but in fog, this world will be mine!” is such a great line and it has no reason to be.

Palmon is feeding on soil that tastes polluted so Mimi waters her with bottled water. A great lore moment. Mimi’s Dad comes home and wonders why she’s waiting outside, he is late home because of the fog.

Mimi brings Palmon upstairs and says that she couldn’t be a doll because it doesn’t suit her style. Also Mimi’s Mum cooks weird things and Mimi’s Dad loves everything she cooks.

Joe is sad he got a C on his test and Joe suggests him getting into politics.

Meanwhile, Matt’s Dad is having issues at work due to the fog, which he goes to investigate and Kari is worried about Gatomon.

In the morning (August third, because, while this is episode 35, only two full days have passed), a Phantomon (my favourite) and a horde of Bakemon are rounding up residents around Tokyo Big Sight in order to find the eighth child.

TK leaves home with his Mum as TK says he can’t leave the others while Matt is woken up by his Dad who hasn’t slept and Sora leaves for Soccer practice.

Bakemon show up at Tai and Kari’s place and grabs their Mother and similar happens at Mimi’s and Sora’s place. Biyomon saves Sora’s Mother.

Myotismon wants to separate the children from their parents so they’ll scream and cry.

Matt’s Dad tells Matt to stay with Gabumon, causing Gabumon to question how he knows him. Not just Gabumon is confused – the viewers are also confused by this. I like to think the English dub wanted to imply that Matt’s Dad was an original chosen too, but forgets to mention it later.

Mimi and Sora are among the captured humans (fun fact: so is Daisuke Motomiya, according to one of the 02 CD Dramas, meaning that this is the first moment where a new chosen is chosen).

Sora’s Mum asks Biyomon if Sora hates her, Biyomon tells her about her evolution.

Meanwhile, Mimi’s Mum vents which explains where she got it from and Sora recalls weakening Bakemon with Joe, so she formulates a plan to do the same so that they can escape.

DarkTyrannomon appears, and Mimi’s parents are incredible, causing Togemon to evolve to Lilymon, who then makes DarkTyrannomon a nice Digimon with a flower crown.

Biyomon shows up and evolves to fight off and scare the Bakemon. In the meantime, Tai meets with Matt and lets him know that Kari is gasp the eighth child!

Myotismon is so threatened by Lilimon that he decides to fight her.

Rating for my Rewatch of Digimon Adventure Episode 35

This episode is so full of so many character moments for such a large group of the cast; while it’s Mimi’s episode, Sora and Izzy get moments too and we learn more about the different family dynamics.

So what were your thoughts on your rewatch of Digimon Adventure Episode 35? Let me know in the comments or in the discussion thread on /r/Digimon!