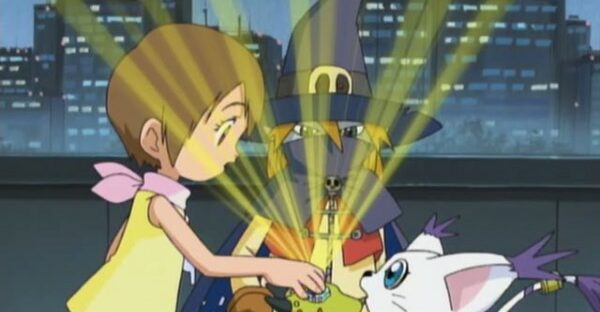 I don’t even know what happens in this episode besides the obvious plot point described in the episode’s title.

I remember this episode being fairly boring, so let’s see if that changed.

“The Eighth Child Revealed”
(“The Bond of Destiny! Tailmon”)

I don’t like how mad Matt sounds about meeting Pumpkinmon and Gotsumon.

Joe had no luck finding the eighth child as he couldn’t find anybody who also moved from Highton View Terrace. Tai is still looking for his address book and Kari comments that his room is messier than Miko’s little box.

Gatomon is continuing to stalk Kari really badly and is wondering why she couldn’t murder her earlier.

Gatomon is jealous of Miko and then remembers how Myotismon abused her in the past when she was a Salamon and she has a scar on the back of her paw from him when she was young. Wizardmon is reading her thoughts and Gatomon scolds at him.

Gatomon’s past is so emotional – he used to beat her because he didn’t like her eyes and was awful because he could be.

Wizardmon then leaves to look for the crest and finds the Digivice. DemiDevimon shows up and Wizardmon says he found special sauce of tacos (originally it’s alcohol and he’s drunk).

TV reporter is talking about sudden anaemia. Matt calls Tai and lets him know about the previous episode.

Wizardmon appears again with the Digivice and theorises that the reason Gatomon can’t kill Kari is because Gatomon is Kari’s Digimon and how Gatomon has lost memories. We get a sweet flashback from Wizardmon and Gatomon’s first meeting.

Kari steps onto the balcony and Wizarmon uses this as a moment to prove that the two are the eighth chosen pair. Wizarmon hands Kari her Digivice. Tai sees them and gets Agumon to attack, but Gatomon stands in the way of the attack, proving that she wants to protect Kari.

Tai still doesn’t believe that Kari is a DigiDestined, despite him already having his suspicions.

While, as an adult, it’s fairly obvious, I remember being surprised that Gatomon was Kari’s Digimon when I first watched this episode.

Gatomon and Wizardmon now need to retrieve Kari’s real crest from Myotismon as Tai looks after Kari’s Digivice, so they sneak off to do so. Myotismon realises that this is super suspicious, throws Wizarmon in the bay (as you do), and kidnaps (catnaps?) Gatomon in order to lure the eighth child out.

Tai and Kari are watching and Tai and Agumon leave to see if Gatomon is okay. Greymon attacks Myotismon and then evolves to MetalGreymon, giving us Hey Digimon, which causes Myotismon to ollie outie with Gatomon despite turning MetalGreymon back to Agumon and not killing him.

Rating for my Rewatch of Digimon Adventure Episode 34

What a twist, Kari is the Eighth child and everyone is somehow surprised. The highlight of this episode is most certainly Gatomon’s back story, which more or less carries a ‘just passable and okay’ episode.

Gatomon’s backstory is really emotional and pulls at the viewer’s hearts. I actually enjoyed this episode surprisingly and was unsure whether to give it a 3 or a 4. I should have known it was a good episode because we don’t get an evolution until the last few minutes and it’s only one evolution.

Also interesting to note that MetalGreymon devolved to Agumon and not Koromon.

Also I’m sorry about how many times I have and will continue to write Wizarmon and Wizardmon interchangeably. I tried to fix it as much as I could in my notes.

So what were your thoughts on your rewatch of Digimon Adventure Episode 34? Let me know in the comments or in the discussion thread on /r/Digimon!