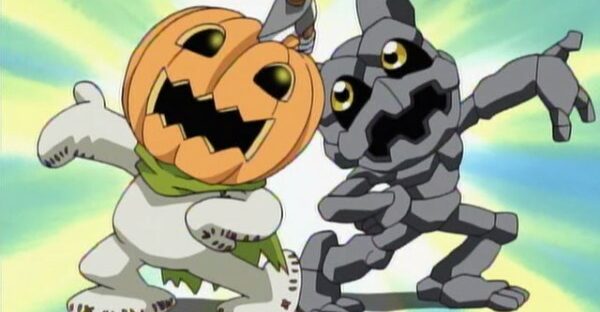 I really love this episode; it’s fun, we get more ‘brotherly love’ and we get to meet some bad guys who really just want to have fun.

I last watched this episode for the Halloween 2019 podcast episode with Brady because it’s my goal in life to ensure everyone I know has seen this episode.

“Out on the Town”
(“Pump and Gotsu are Shibuya-Type Digimon”)

Jesus, ShibuRya is such a weird pronunciation which Tai gives us in the recap. Fairly certain this is the first time we get the updated opening in the English dub which includes Myotismon.

Pumpmon and Gotsumon are driving and are just great and the English dub improves this as both don’t have particularly visible mouths.

Matt and TK are on the train on the way home. Tsunomon and Patamon are giving the viewers backstory and exposition about how Matt and TK are brothers but their parents live apart. Just forget how the dub said they were half brothers like thirty episodes ago. Patamon says how it’s sweet brotherly love and they like it when they get mushy and TK gets mad at Patamon and Patamon flies off when the train doors open. TK runs off the train with Matt and Tsunomon at the last moment to follow Patamon.

Meanwhile Pump and Gotsu are the best and are upsetting everyone and causing havoc. Matt, TK, and Tsunomon find them, and Tsunomon evolves to Gabumon and stops them, accusing them of working for Myotismon. They say how somebody scarier than Myotismon is chasing after them – a teenager. Gabumon calls Pumpkinmon and Gotsumon their enemies, but it turns out they actually are just having fun and don’t want to be evil. They even want to go to Hollywood next, but I’m not sure who told them about Hollywood.

Matt and TK lose track of the pair, but when they find them, they’re trying on clothes, when Matt and TK try to stop them, Pumpkinmon and Gotsumon give them new clothes too. Patamon flies off, and everyone runs after him.

Meanwhile, Patamon is feeling bad and overhears two girls talking about how easy it is to find somebody at the park (actually in the original they’re talking about Hachiko).

Meanwhile, Patamon overhears the fight and TK is feeling guilty that this is all his fault. TK’s feelings reach Patamon, who evolves to Angemon, for like, the second time ever I’m fairly sure. Myotismon says “Angemon? Hmph they must be desperate if they sent you”, which is a weird line, honestly.

Hey Digimon starts playing and Myotismon says he should take his leave. So I guess this isn’t his jam.

TK and Patamon are reunited and TK apologises. Matt and TK immediately start having flash backs of Pumpkinmon and Gotsumon from like ten minutes ago.

Gatomon is still stalking Kari, but it’s weird because we didn’t see either of them this episode because it’s basically filler. Oh well.

Rating for my Rewatch of Digimon Adventure Episode 33

As I said in my opening thoughts, I absolutely love this episode, it’s completely dumb and is arguably filler, but, oh my gosh, it’s such a fun episode to watch and it’s definitely one of my favourite episodes in the arc.

So what were your thoughts on your rewatch of Digimon Adventure Episode 33? Let me know in the comments or in the discussion thread on /r/Digimon!