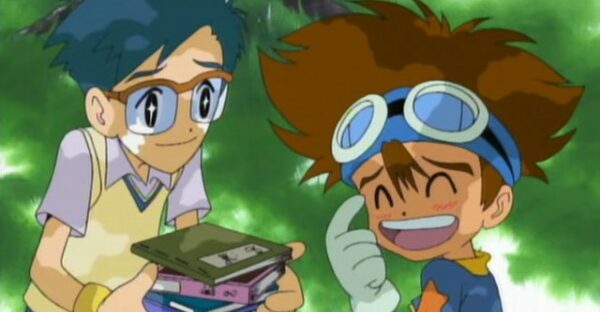 I remember this episode being similar to ‘The Crest of Sincerity’ due to Sora and Mimi being the focus but I barely remember anything else beyond that.

First of all, there’s certainly something off about Izzy reading the recap – and reading would be the correct word to describe the voice; Izzy’s voice is usually so emotional and lifelike, but the delivery of the recap falls fairly week and feels like somebody reading a script rather than somebody narrating.

Anyway, Myotismon is actually being terrifying talking about how human blood tastes better with a dash of fear. He then seduces and feeds on a woman in a fairly horrifying scene.

Tai is looking through his old stuff and comments about how disorganised he was as a kid as he’s looking for his phone book from school which dates this episode incredibly. Meanwhile, a TV reporter is talking about how so many women are being taken to hospital with sudden anaemia, nobody comments on it, apparently, and then Izzy shows up with Tentomon in a disguise.

The group then leave with their Digimon in adorable but fairly useless disguises, Tai mentions how he couldn’t find his phone book and he’ll use Sora’s. The others join in and all of the Digimon are in great (but bad) disguises. They’re talking about how there are Digimon on the news and they’re not fake like when Tai and Kari saw them. Joe turns up late and doesn’t want to miss Izzy’s theories.

Izzy mentions how all of the chosen saw the battle four years ago and how he has the reading of the 8th child and that’s why the Digimon are there. Izzy mentions that they have to call through all the kids in their phone books and patrol the city. Joe is too busy studying but says he can make the calls – Matt is really, really awful when he dumps his books on him.

Meanwhile, Myotismon and his goons are still hunting for the 8th child and Gatomon and DemiDevimon do not get on.

The chosen go off in their own directions in order to patrol the city while Joe makes the calls.

Biyomon and Palmon are fighting in the pram and Mimi says that the heat is making them cranky while Sora is just annoyed by the Digimon bickering.

Kari is still looking for Miko and sees Gatomon, who says she is a funny looking kitty, Kari asks Gatomon if she’s a friend of Agumon (is that like “friend of Dorothy” but for weebs?) and if she’s one of them. Gatomon wonders if she’s the 8th child and Kari invites her in. It’s fairly adorable.

Back to Mimi, she’s saying how it’s so hot and she wants to hire somebody if she ever has a baby. Biyomon doesn’t like spinach, or something. Mimi says they shoudl go where lots of people gather – Tokyo Tower.

The aircon dies and Mimi notices a man – who is actually a Digimon – wearing a coat and starts complaining about him. Tai and Izzy notice that the tower is bending and they see Birdramon and Togemon fighting SkullMeramon. Izzy and Tai help out.

We get mostly skipped evolutions except for Agumon to Greymon to MetalGreymon, who wins the fight because you thought Mimi and Sora could have another episode where they saved the day?? Also, the dub has some weird RaARRrr noises during this scene and I can only imagine the voice actors breaking into hysterics about it. Also Togemon gets an attack which I never think is used again (or at least, it isn’t announced) – Lightspeed Jabbing.

Another TV report is talking about Tokyo Tower, which Kari and Gatomon are watching. Gatomon is trying to murder Kari, and Gatomon immediately knows she’s the chosen she’s looking for. Gatomon leaves and Kari is sad. Gatomon says her sweetness makes her edge.

The TV report narrates the end which is kind of a nice touch but it feels weird.

Rating for my Rewatch of Digimon Adventure Episode 32

I love watching Digimon wear dumb disguises and how people just seem to go along with it, though the main highlight of this episode was clearly the actual horror of Myotismon feeding on human blood.

Also the inclusion of phone books thoroughly dates the episode but I love it.

So what were your thoughts on your rewatch of Digimon Adventure Episode 32? Let me know in the comments or in the discussion thread on /r/Digimon!