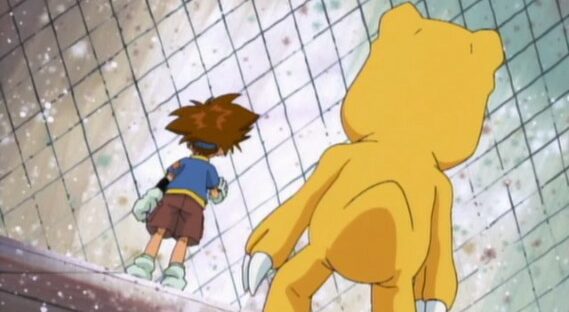 The end of the arc where our damsel in distress gets rescued.

Matt narrates the pre-opening last time on…and after the opening Tentomon does the same.

Izzy guesses that Datamon didn’t actually go anywhere and actually took Sora to a place underneath the pyramid. Tai is determined to save Sora and is fine with going alone, but everyone wants to come too.

Sora wakes up and is able to use Sora’s Digivice to give power to Biyomon, and then says he plans on cloning Sora. He wants to do all this to destroy Etemon, which is weird, because the chosen want to anyway.

The chosen come up with a plan for all of them but Tai and Agumon to act as decoys as there are Digimon patrolling the area. Izzy says there’s another electrified wall.

Mimi is dumbed down again, but it’s a funny line. Tai says Roger to Izzy, and Mimi gasps and says that he forgot his name.

Izzy and Tai run off to rescue Sora. Mimi tells Palmon to evolve, but we don’t get an evolution clip because too much is happening to waste 20 seconds.

Meanwhile, Sora wonders what the noises outside are, and Datamon says it’s her friends.

Weird thing, we get the evolution music during a battle scene where all the Digimon are already evolved. The kids are fighting Etemon as a distraction and are doing well until Etemon plays his song that causes Digimon to deevolve. Etemon gets distracted learning where Datamon is, and the children are able to escape. They wonder how Tai is going.

Izzy and Tai are progressing through the Pyramid, Etemon shows up, and Izzy tells Tai to continue on and Tentomon evolves (this evolution isn’t skipped).

Tai and Agumon come across the eletric wall, and Agumon says he’ll go, but Tai says that he should go because he has to face his fears. Agumon tells him to go on, Tai finds the fake part and his crest glows. Agumon evolves to Greymon in a very quick clip as Tai goes through the wall to Sora.

He finds Sora, but she ignores him, but it’s the copy. Datamon is giving the crest to the copy. I don’t like Datamon calling Sora a maiden. Tai gives Sora her Digivice and Biyomon evolves to save her.

Etemon breaks through and plans to destroy Datamon. Datamon is intent on pulling Etemon down with him into the dark pit, which he does. The Pyramid distingerates, unfortunatly, Etemon survives and is combined in his dark network.

The children fight Dark Network Etemon, Sora says that this must be the end. Tai says he’s not ready to surrender, and charges forward with Greymon. Etemon respects his bravery and Tai says he’s not leaving Greymon’s side. Greymon evolves into MetalGreymon, but his evolution clip is weird as I feel he announces Greymon far too soon in the clip.

Etemon is excited and says that this is a fully evolved Digimon. Tentomon reads the analyser but says ‘Giga’ as ‘Gee Gar’.

MetalGreymon defeats Etemon and his Dark Network, but Tai and MetalGreymon are sucked into the dark pit with Etemon. The chosen can’t find Tai or Agumon anywhere after the battle.

Meanwhile, Koromon and Tai are home in the human world.

Rating for my Rewatch of Digimon Adventure Episode 20

We get our first perfect evolution and Etemon is (seemingly) defeated along with Nanomon! However, Tai has disappeared only to reappear somewhere completely different.

As I mentioned in my review for the previous episode, a lot happens in these two episodes and we get a lot of great moments.

It’s something I noticed when I covered these episodes on the podcast, but whenever there’s a good episode, evolutions are skipped as there’s no time to pad the episode out with evolution clips. This episode skips all evolution clips except for Augumon to Greymon to MetalGreymon, Tentomon to Kabuterimon, and Biyomon to Birdramon. But the rookie to champion evolutions feel a lot faster and are the shorter clips.

The evolution to MetalGreymon is a fairly emotional scene, as all first time evolutions should be.

So what were your thoughts on your rewatch of Digimon Adventure Episode 20? Let me know in the comments or in the discussion thread on /r/Digimon!

We’ll be moving on to episodes 22-26 next week. If you are following along, let us know your thoughts and what you think of the rewatch so far!