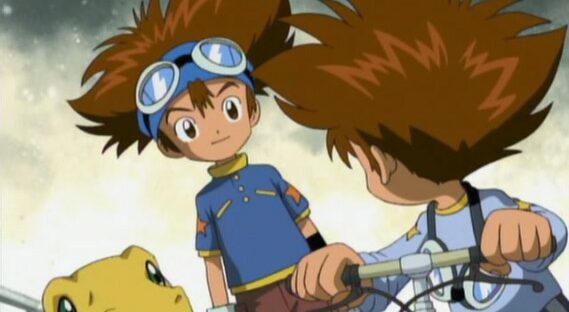 Back to Tai’s improvement arc, we meet Piximon and the children continue to earn their crests in ways that slightly relate to their individual trait.

Mimi saying how cool how all the crests are different. They’re all talking about the crests, except for Tai who is leading the group and wants them to speed up. Suddenly, a Kuwagamon appears from below. They wonder if it’s the same one, Palmon mentions that this one is bigger, Agumon notices that this one is stronger.

Gabumon tells Agumon to evolve and both Tai and Agumon are anxious about evolving. Thankfully, a Piximon appears and rescues them. Piyomon says he’s famous for training Digimon fighters, but he’s not very impressed with them as the DigiDestined or their partner Digimon.

Matt is reminded by a gym teacher, and I’m reminded by Ducky from The Land Before Time and Yoda from Star Wars. Pixiemon mentions a special training program for Matt and Agumon. Joe is wondering if they can trust him, and Izzy says he checked for black gears.

Pixiemon leads them to his hidden dojo. Joe is still suspicious as they enter. Etemon and his trailer drive nearby, but Pixiemon assures the group that he can’t see them. Pixiemon tells them to climb some stairs and it’s the part of their training and flying is forbidden and that the easiest way is often a trap. Pixiemon then tells everyone to clean the floors before they can eat, and then addresses Tai and Agumon and says that he has another training task for them.

Pixiemon takes Agumon and Tai to a cave and Tai wonders what chore they’ll have. Pixiemon abandons them and tells them their task is to find their way back.

At night, Matt mentions that Tai and Agumon haven’t returned. Matt and Izzy’s tags start glowing so they decide to look for their crests, just elect not to wake their Digimon.

Meanwhile, Tai and Agumon are floating on a boat, they keep arguing and both end up in the water.

In the morning, the children are awoken by Pixiemon, they wake up and notice Izzy and Matt are gone. Pixiemon mentions they left at midnight. Sora wonders why people keep going missing and Joe accuses Pixiemon of being evil.

Matt and Izzy are still looking for their crests. Izzy wants to find the crest to learn more about Kabuterimon and Matt wants to evolve himself. Their crests continue to react and they decide to go pass the barrier into a glowing well.

They go down the well and hold their tags to the walls, retrieving their crests. Etemon is nearby and Gazimon informs him that they have detected the chosen. Etemon sends out a Tyranomon, as this is his territory.

Pixiemon is berating the children, and they hear the barrier being broken. The children run through the barrier to save Matt and Izzy.

Tai and Agumon are still floating away on a boat. They reach a bridge which Tai remembers. The pair find a young Tai trying to ride a bike. Tai gives his young self a motivational speech about not giving up because of a few mistakes and then helps his young self ride the bike. Tai says that he should overcome his fear.

After this realisation, Tai and Agumon work together to row the boat back, where they find the team under attack. Agumon evolves to Greymon, as the other Digimon were unable to evolve because of Etemon’s song. Greymon fights Tyranomon and wins. Piximon is now sure that these are the DigiDestined and they are able to save the Digital World.

Rating for my Rewatch of Digimon Adventure Episode 18

Episode 18, along with episode 17, are the low points of a fairly solid arc; Tai appears to grow in this episode, but seems to take a few steps back for the upcoming episodes, making the arc seem weirdly not linear.

There are a few parts in this episode that feel fairly lacking – Piximon is just using the other children and is only really training Tai?

So what were your thoughts on your rewatch of Digimon Adventure Episode 18? Let me know in the comments or in the discussion thread on /r/Digimon!

We’ll be moving on to episodes 22-26 next week. If you are following along, let us know your thoughts and what you think of the rewatch so far!