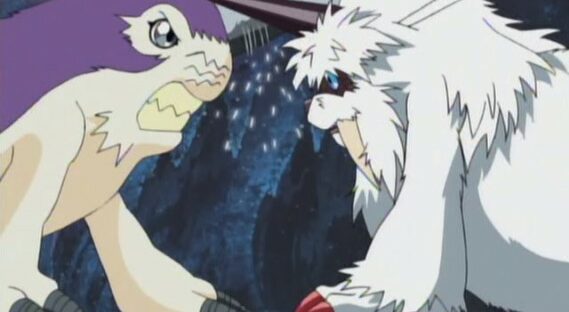 We’ve beaten the first boss, but we’ve found out that there are darker forces at work, Devimon was nothing, and the children were actually brought here for another bad guy!

Because of course that’s the case.

Weird thing how we get the previously on, and then another bit of narration from Tai.

The children are amazed that there’s another human. Gennai says he is human and not human. Gennai didn’t call them there and doesn’t know how they can get home, but they should come to the Continent of Server to defeat his enemies, and how they’ll be able to if his Digimon can evolve once more. To do so, they will need tags and crests, but Devimon has sealed away the tags.

Gennai’s voice is so weird, sounds like if the voice actor for Rick from Rick and Morty was bored and reading something line for line. Gennai’s connection is lost, and he calls out for Devimon for some reason. TK is rubbing the DigiEgg and says he wants it to hatch. Matt says that he’s sure when the egg hatches it’ll be the coolest Digimon ever….despite we already know what Patamon is.

Joe says that they should stay on File Island and not trust Gennai. Sora is hessitant too and Izzy wonders how they’d even transport to the other island. TK says they should go and Gabumon says he’ll go too because they’ll get the tags and crests and Biyomon and the other Digimon all say they should go, which is a nice moment where the Digimon partners have their own personalities. Gomamon even says he’ll swim the whole way.

The children begin to build a raft to be transportation. Leomon shows up and the kids get scared, but he’s going to help. The Digimon from previous episodes show up to help. TK points out Frigimon, despite never meeting him. The Digimon help the group build a raft.

The raft is complete, and TK’s DigiEgg hatches to Poyomon, a jellyfish type Digimon. They depart on the raft, and we get a narration from Tai almost seeming like he’s narrating this from the future.

After a while on the raft, Joe says the salt air is hurting is sinuses, which is weird, because salt water air is meant to help sinus infections. TK is bouncing Poyomon up and down and most of the children are feeling a little seasick.

They see a big wave, and then they see a Whamon surfacing who disrupts their raft and then eats them. They arrive in the stomach after a rough ride down and gastric juice starts seeping in, the characters then see a black gear, and Palmon is useful and forms a bridge for Tai to climb to the black gear so he can destroy it.

Whamon expels the group from his blow hole and Tai asks him how far away Server is and Whamon says 5 days with trafic and 3 without. Whamon says he’ll give them a lift.

They stop at an underwater convience store to find the tags and are attacked by a Drimogemon with a black gear which Devimon had tasked with the job to gaurd the tags. Gomamon evolves to fight, and Tentomon evolves to help. TK can’t find Poyomon, but Poyomon has found the tags in a box. Drimogemon apologises and says the tags are in the store next to the turkey. The children then continue riding Whamon to Sever to find the crests so their partners can evolve.

That’s it, that’s the episode.

Rating for my Rewatch of Digimon Adventure Episode 14

I’ve always found this episode to be fairly boring and that it could have been easily smushed into either the end of episode 13 or the start of episode 14, or, alternatively, had the tags come out of Devimon once he was defeated, they can still have the raft building, breaking, and being rescued by Whamon, but a lot of it is fairly unnecessary.

The episode has the first instance of awfully obvious plot convenience and it shoehorns in a fight just to make it slightly less boring (albeit, with a Digimon that I’ve wrote about loving before), it just feels so cheap and unnecessary as a weird gap between two arcs.

So what were your thoughts on your rewatch of Digimon Adventure Episode 14? Let me know in the comments or in the discussion thread on /r/Digimon!