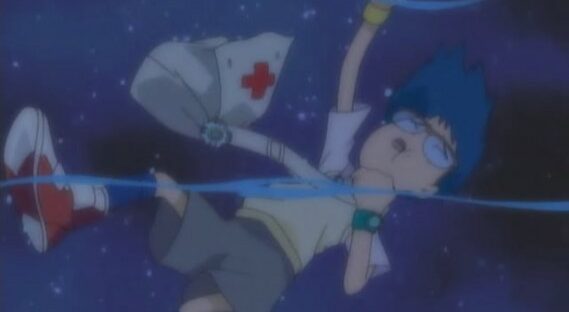 More of the same as episodes nine and ten, we see another two character reunite on an island.

Unlike her last narrated introduction, Mimi sounds more like a real person this time, except for when she calls Leomon a ‘bad kitty’.

Devimon explains that he has something special planned for Joe and Sora because it’s the Bakemon holiday.

Meanwhile, Joe is floating on a bed and Gomamon ate all the food incase he needs to Digivolve. A crate floats to them, but it’s got Ogremon inside, because of course it does. Despite not being a ‘good Digimon’, Gomamon still attacks. Gomamon fights Ogremon and Gomamon summons his fish, but it’s not enough to beat Ogremon, so Gomamon evolves to Ikkakumon.

Ikkakumon swims off with Joe on his back, but Ikkakumon is tired and hungry and deevolves, causing them to sink.

Meanwhile, as Biyomon sings to inform us, Sora is fishing. Sora catches Joe on the fishing rod, which she says must be a whale.

Gomamon explains what happened what happened, which, to be honest, is a pretty unnecessary five minutes. Gomamon then says that he’s worried about Joe’s confidence, so they should make him the leader. Joe wakes up, Sora asks Joe what they should do and calls Joe the leader and everyone agrees.

Joe reluctantly accepts when Gomamon reminds him of how he is brave and he fought Unimon.

They see a church in the distance. Sora says it all seems familiar, it turns out they’ve been here before. Joe wonders if the others are in the church and is suddenly over confident. Gomamon wonders if a black gear got him.

There are people inside the church who are all dancing and wearing masks. Apparently they’re celebrating the Bakemon holiday. Gomamon asks if they mean Lord Bakemon and says that he’s a horrible Digimon who lives with ghosts and doesn’t have friends. The humans turn out to be Bakemon, Gomamon says that nobody has seen Lord Bakemon’s true form before.

The dancers are also Bakemon.

Gomamon is hungry and can’t evolve and Biyomon is also unable to. So the children are captured by the Bakemon. Joe breaks down because he doesn’t want to be eaten and was meant to go to med school. The Bakemon are putting salt and pepper on them. Meanwhile, Gomamon and Biyomon are in jail. There’s a sleeping gaurd Bakemon. Gomamon has a plan, he wakes the Bakemon and asks him when he’s going to torture them. Gomamon says he should taunt them by eating food infront of them. Gomamon and Biyomon beckon him closer until they can eat the food.

Joe and Sora are about to be eaten when Gomamon and Biyomon evolve to save them.
After they’re saved, Joe says that they have to beat Lord Bakemon by chanting a mantra. He starts chanting and they use Sora’s hat as a drum, which is a solid helmet. Lord Bakemon begins to weaken enough for Birdramon and Ikkakumon to beat him.

The earth begins to shake and reveal black gears which break. The island begins to move back towards Infinity Mountain, and Joe hopes that the others are there.

Rating for my Rewatch of Digimon Adventure Episode 11

More of the same, but we get to see the strengths of the more cautious of the chosen children. At least this time the Digimon was actually evil and not a good Digimon either possessed or with a black gear.

This arc is also pretty fun to see locations that we know of from Digimon World.

So what were your thoughts on your rewatch of Digimon Adventure Episode 11? Let me know in the comments or in the discussion thread on /r/Digimon!

That’s a wrap for week 2! What were your thoughts on this week’s episodes?