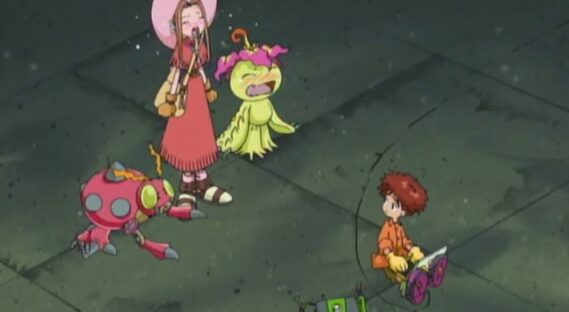 This episode has an interesting occurance that we don’t really see much of in Digimon: interactions between a chosen child and another chosen’s partner Digimon.

Gabumon narrates the intro and sounds oddly like Captain Kirk.

Izzy says a million words in about two seconds as they land, Tentomon makes a joke that it’s just hitting the beach.

Mimi also lands, makes a frequent flyer miles joke, and then complains about the humidity. Sukamon and Chuumon show up, Palmon calls the DigiLosers, which isn’t nice.
They’re really creepy and want her to pay a toll. Mimi insults them and then they attack her with poo, but Mimi’s Digivice activates and Sukamon and Chuumon say that they’ll be nice now. Mimi asks if they’ve seen other humans, and they mention seeing a human and a Tentomon. They will show Mimi and Palmon where they landed.

However, they’re separated by a river. Sukamon asks for a thank you kiss. Palmon, being useful, uses her vines, which are poison, to help Mimi across. They then pull faces at Chuumon and Sukamon.

Meanwhile, Izzy is in the labyrinth learning things and noticed the DigiMoji, Tentomon says they should probably be trying to find the others. Izzy is basically ignoring Tentomon and wants to find a power source for his laptop, he finds one. I love this ongoing thing which we also find out about in Tri where Izzy will just talk and talk and hyper focus.

Mimi sees Izzy and talks to him about looking for the others and asks what he’s doing and if translating the DigiMoji can wait until they find the others.
Mimi keeps talking to him and he just completely ignores her and Mimi gets offended. We get another ‘Prodigious’ when Izzy learns that the ruins are a giant maze, Mimi and Palmon burst into tears, Mimi runs off because she’s hungry, her feet hurt and ‘a giant lemon custard’ tried to kiss her and she wants to go home. She’s completely legitimate.

Palmon accuses Izzy of caring about computers more than people. Tentomon dissapears to find Mimi. Mimi falls over and starts to cry saying she’s not a bad person and how she just wants to go home, and she misses her baby brother who doesn’t exist.

Izzy tracks down Mimi by finding a signal from her Digivice, they’re able to communicate so he can navigate them out of the maze. Izzy detects something else on the map.

It’s Centarumon, Mimi and Tentomon end up at a dead end and they’re in danger. Mimi wants Tentomon to Digivolve, but he says he can’t because he’s separated from Izzy. Izzy is able to reach them and Palmon is able to Digivolve to protect Mimi. Tentomon also evolves. There’s not much room for them, which is a pretty cute and funny moment. They break through a wall to get to the outside so there’s more space and they destroy the black gear.

Mimi asks if Centarumon if he’s a good Digimon now, Centarumon notices Mimi’s Digvice and says he’s seen it before, there’s a drawing of it in the labyrinth and he’s the guardian of the temple, Leomon shows up and he and Centarumon fight.
Mimi’s Digvice activates and stops Leomon, and she shines it at him to get rid of him.

Mimi is really hungry and wants to find the others, Izzy goes back to translating. Mimi kicks a giant moving gear, which then reverses and the island heads back towards Infinity Mountain.

Sukamon and Chuumon show up and Mimi is understandably disturbed.

Rating for my Rewatch of Digimon Adventure Episode 10

Episode nine is the same as episode ten; two kids of the chosen are reunited and they disagree slightly but everything is okay once they beat up two Digimon.

However, episode ten has interactions between one of the chosen and somebody else’s Digimon, a weirdly underused concept in the Digimon franchise, which we don’t actually see much of (I can only think of Tamers and Appmon which has similar scenes).

So what were your thoughts on your rewatch of Digimon Adventure Episode 10? Let me know in the comments or in the discussion thread on /r/Digimon!