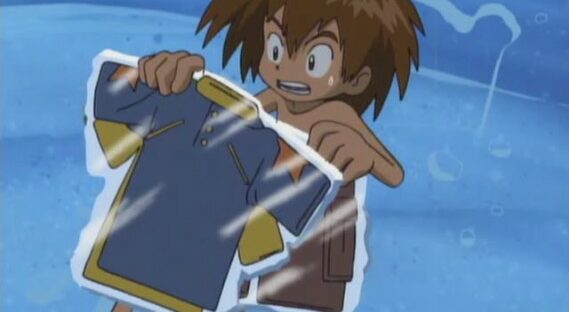 The cast is split up! Meaning that we get to know a bit about the relationships and tensions between a few of the characters.

The children are seperated and I totally dig Devimon’s evil laugh and voice.

Taichi and Agumon land in a frozen area, and Agumon unfreezes his frozen clothing.
They find mail boxes, and Tai wants to mail himself home.
Agumon says it’s quiet and how no evil Digimon are attacking.
Frigimon shows up, and Agumon says in a weird voice that sounds like somebody doing an impression, says he’s a good Digimon. So naturally because he’s a good Digimon, he attacks.
Frigimon keeps saying his own name.
Tai calls Agumon tubbymon when Agumon advises Tai throw him so he can destroy the gear.
There’s a soccer move and Tai launches Agumon in the air, destroying the back gear in Frigimon without evolving.
Frigimon mentions seeing Matt and Gabumon, Frigimon helps them reach the island where Matt is by freezing a bridge.

Meanwhile, Matt is looking for TK, Gabumon is worried about Matt because he’s cold and coughing. They find a cave for shelter, but Matt only runs to it to see if TK is there.
Gabumon’s voice also sounds weird in this episode; he sounds like Father Christmas.
Matt feels bad that he’s not looking for TK and that Gabumon is instead.

Frigimon makes a joke about ‘Dad, are we there yet?’ despite Digimon not knowing what parents are. Tai says he wishes Agumon could fly like Birdramon.
Frigimon picks them up to carry them and starts telling them a story about Numemon crashing a party.

Meanwhile, Matt has left the cave and freezes and Gabumon is worried he’ll die. Gabumon takes off his fur to keep Matt warm.
Matt wakes up and Tai arrives at the island where Frigimon saw Matt and Gabumon land.
Gabumon has a cold now.
Tai and Matt reuinite and Matt calls Frigimon ‘Frosty the Snowman’. Frigimon only saw Matt and none of the other chosen.
Tai asks how Gabumon got sick when he has fur and Matt yells at Tai to leave him alone.
Matt says they have to look for the others and Matt says that they don’t know how to get to the other islands.
They immediately start fighting because Tai wants to come up with a plan and Matt just wants to find the others immediately. Matt runs off and we get some amazing looped animation. Tai tackles him and tells him to calm down and that he’s on his side. Matt punches him and they get into a fist fight while their Digimon try to stop them.

Matt explains the reason why he was so unsettled was because TK is all alone. They’re on a cliff face, Mojyamon, a good Digimon who doesn’t like fighting, shows up to fight and kill the children.
Frigimon saves them and has food to make them feel better. Mojyamon attacks.
Agumon and Gabumon evolve and free Mojyamon from the black gear.
Matt says they still have to find the others, there’s a crack in the island which reveals some gears, the island now moves back towards infinity mountain.

Matt thinks to himself about how TK has Patamon with him so he’ll be okay and together they’ll all be able to beat Devimon.

Rating for my Rewatch of Digimon Adventure Episode 9

What happens when you put two angry boys together without any means of mediation? A fist fight. Of course.

It’s an important episode in terms of the relationship between Matt and Tai, but I feel like Tai’s personality changes far too much.

So what were your thoughts on your rewatch of Digimon Adventure Episode 9? Let me know in the comments or in the discussion thread on /r/Digimon!