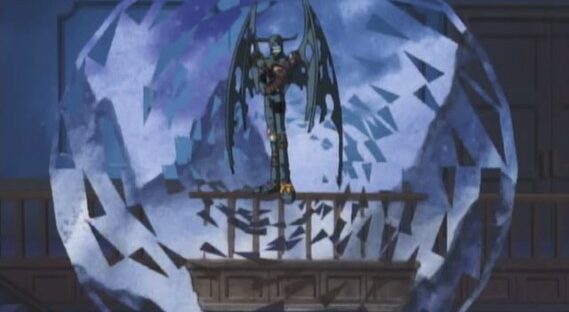 It’s time for us to dip out of the formulaic monster and evolution of the week (sorry TK, no evolution episode for you), and dive into some plot with our first big bad!

“Evil Shows His Face”
(“Devimon: the Emissary of Darkness!”)

We meet Leomon and Ogremon who are rivals, they read each other’s Digimon analysers. They take about black gears and how Leomon wants to stop it. The dialogue feels really forced in this scene, it feels like they’re JUST reading a script, especially Ogremon.
Devimon shows up and demands that they join him. Ogremon says he can help Devimon alone and doesn’t need Leomon, Leomon threatens Devimon for wanting to hurt the chosen children. Devimon is in control of the black gears and takes control over Leomon.

Meanwhile Tai is drawing a map and everyone insults his drawing abilitiy.
Nice added line from Mimi who just worked out that her gloves don’t go with her hat.
Leomon shows up and the partner Digimon say he’s a good Digimon. He then attacks, because of course he does.
Ogremon shows up and Biyomon points out that they’ve always been enemies and shouldn’t be working together.
All the rookie Digimon evolve together and attack.

Devimon is watching and points out that they’ve learnt the secret of teamwork but then wonders why Patamon hasn’t evolved.

All the rookies deevolve because they’re tired. Ogremon and Leomon are no where to be seen. The children wonder where they went and how they couldn’t have flown off, Joe says that everything weird happens here and Sora says how he’s right for once, despite always being right.
The children wonder how they were able to evolve more than once in a day and they decide that they should rest, then there’s a plot convienient mansion.
Tai, for some reason, warns the children that it could be dangerous. Weird that Tai cares and not Joe.

There’s an angel painting in the entrance way and Joe says it must be a good place because there’s an angel. Patamon and TK talk about what an angel is. The place is empty but they can smell food. The children run in the direction of food.
Matt says it looks like a setup and Sora agrees.
All the Digimon eat and so do the kids.
The children decide to take a bath, Tentomon mentions he sheds?
Apparently the bath is cold.

The boys and girls are separated, Gomamon is on the girls’ side and gets thrown over the divider.

The children find a room with eight comfortable beds.
Joe brings down the mood by realising how far they are from home and the children worry about how worried their parents must be.
They all go to sleep.

Devimon muses how easy it was to decieve the children and their Digimon.
Tai and Agumon are going to the bathroom in the middle of the night. Ogremon is laughing in the bathroom stall next to Agumon, he breaks down the wall, and Tai runs to wake up the others.
Leomon and Devimon show up and Devimon removes the illusion of the building and then says he’s going to seperate the children.
The Digimon are weak because they haven’t actually eaten, Devimon says that everything was an illusion.

Devimon says that he found out about the black gears and uses them to do his being. He keeps calling the children DigiDestined.
Tai says that they’re just kids who went to camp and aren’t destined for anything.
Leomon attacks Tai, but Tai’s Digivice shines light that bursts the gear out of Leomon, causing him to return to good.
Leomon says that the Digivices are proof that they’re the DigiDestined as they would be useful in the hands of anybody else.

Ogremon and Leomon fight and Leomon tells Tai to escape because he’s their last hope.

Devimon yells out ‘feel the touch of evil’ as Tai calls out for Leomon.

Devimon is talking to Leomon about destroying the chosen and Leomon’s voice sounds like the cave in Aladdin.

Rating for my Rewatch of Digimon Adventure Episode 8

Nice to get some break from formula, and this episode is fairly eerie and creepy, we get some lore and meet other Digimon with personalities other than ‘monster’.

So what were your thoughts on your rewatch of Digimon Adventure Episode 8? Let me know in the comments or in the discussion thread on /r/Digimon!