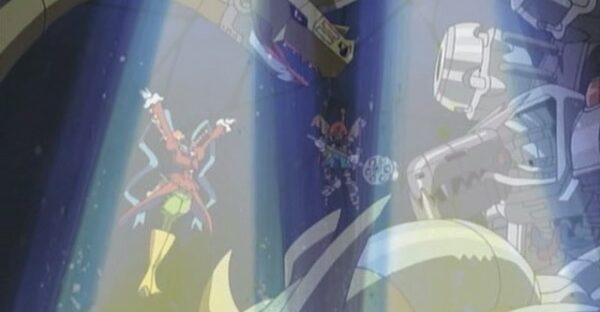 Remember the Royal Knights arc of Digimon Frontier? Well this upcoming arc is what it should have been more like.

And the entire arc of Frontier feels like this one individual episode in Adventure.

My favourite episode in Adventure is in this arc, which I’m super excited to watch again, however, this episode is not my favourite by a long shot and, compared to the last arc, the overall episode quality is fairly low as, for memory, there’s only one really good episode in the entire arc.

Our new bad guys have been watching the events on Earth (not sure how unless it’s been in super slow motion) and are aware that the chosen will be showing up soon.

Meanwhile, the chosen arrive in the Digital World and meet Chuumon shortly after their arrival. It’s the same Chuumon from many episodes ago, who explains that he was separated from Sukamon and how the world has been morphed into a structure called ‘Spiral Mountain’ and how this is all because of the Dark Masters.

One of the DarkMasters, MetalSeadramon appears and, despite all of the Champion level Digimon fighting him, he is able to quickly defeat the chosen.

MetalSeadramon pretty much passes them onto Machinedramon, another Dark Master, the children evolve their Digimon to Ultimate, however, they are all beaten again.

The next introduction is fairly fun; WereGarrumon and MetalGreymon suddenly start fighting each other (foreshadowing?) – this is due to the next DarkMaster, Puppetmon. Puppetmon defeats the chosen Digimon and reverts them to their weaker forms and then sends them on to meet the forth DarkMaster, Piedmon.

Piedmon, the apparent leader, easily defeats WarGreymon and MetalGarurumon and actually decides to KILL the children (a rare tactic), starting with Mimi. Fortunately but sadly, Chuumon sacrifices himself to save Mimi. All of the children are able to be murdered when Piximon shows up and floats them away in a magic bubble. Piximon tells the chosen that being together will not be enough to defeat the DarkMasters, but they will have to work that out and to climb Spiral Mountain. Piximon sends the children away in the bubble as he fights the DarkMasters alone.

Rating for my Rewatch of Digimon Adventure Episode 40

We meet the new bad guys and the main characters lose to them very quickly and very easily and this episode, more or less, shows that the Dark Masters are fairly invincible as a group. Good thing the next few episodes will have them hanging out on their own!

So what were your thoughts on your rewatch of Digimon Adventure Episode 40? Let me know in the comments or in the discussion thread on /r/Digimon!