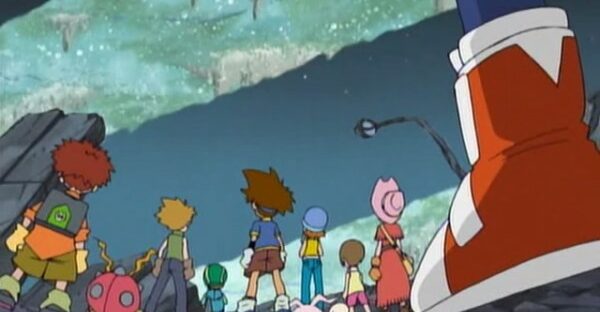 “The Battle for Earth”
(“Two Ultimate Evolutions! Get Rid of the Darkness!”)

Continuing on from the previous episode, WarGreymon and MetalGarurumon are able to fight VenomMyotismon. However, VenomMyotismon unleashes a powerful blast of dark energy that pushes the Digimon away.

Fortunately, the crests of the eight chosen shoot magic beams of light, which binds VenomMyotismon, giving WarGreymon and MetalGarurumon a chance to finally defeat him.

VenomMyotismon’s fog finally vanishes, revealing an upside down image of the Digital World in the sky.

During the past three days, centuries have actually passed in the Digital World. The children rescue a plane flying overhead, which is how Cody in Digimon Adventure 02 was chosen, as he was a small child on that plane.

The children return to the Digital World to fix whatever is wrong there.

Rating for my Rewatch of Digimon Adventure Episode 39

For some reason, episode 38 and 39 mold into one episode in my memory. It’s nice to see the warp evolution scene again at the start of the episode though.

This episode is just a big fight, but the final scene (ie, the scene where the kids say their goodbyes as their family members watch them ascend to the Digital World), really saves this episode with such an emotional sendoff – remember, these kids are all aged 8-12 and they’re just floating off into space while their families watch and wave.

Anyway, I guess it’s time to finish the arc with the highest number of quality episodes as we go into an arc with one or two amazing episodes but primarily fairly dull episodes.

So what were your thoughts on your rewatch of Digimon Adventure Episode 39? Let me know in the comments or in the discussion thread on /r/Digimon!