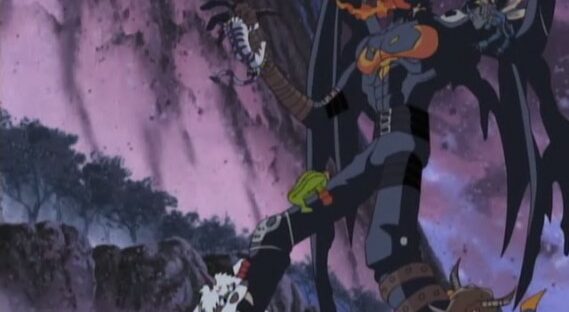 The final episode of the first arc is here! The kids reunite, and we get an evolution.

“The Legend of the Digi-destined”(“Angemon Wakes!”)

Patamon and TK are still at Primary Village and Leomon shows up to kill them. One of the babies states that ‘Leomon has come back!’ despite the baby never having seen him before.

Ogremon shows up and harrasses the Digimon too. Patamon feels bad for Leomon being under Devimon’s control, Patamon also feels bad because he can’t protect TK from Ogremon because he’s so small.
Matt and Garurumon show up to rescue TK, Tai and Greymon show up too and they save the baby Digimon.

Leomon gets powered up by the power of the black gears and basically changes colour and grows bigger. Devimon wants TK, and Leomon advances on him and Patamon can’t fight.

Mimi and Togemon show up as well as Izzy and Kabuterimon and share their information about the Digivices, which Tai then uses to draw the dark energy out of Leomon, the black gear comes out of Leomon and he’s normal again.

Leomon explains that his ancestors prophesised about the DigiDestined coming to save them and he says that they’ve been brought here to save File Island. Izzy says that his theory is that they’ll be sent home when they save the Digital World. Mimi is happy so she can change her clothes, which is fairly reasonable. Everyone is fairly scared of the idea of fighting, but they want to go home.

Devimon is talking to Ogremon and is calling Leomon a traitor for some reason, despite Leomon being always a good guy. Devimon then eats Ogremon and a lot of black gears.

Joe, Sora, Birdramon, and Ikkakumon are approaching too and see the gears around Infinity Mountain. Devimon grows huge and is weakening the Digimon just with his aura, stopping them from evolving to Champion again. Ikkakumon and Birdramon show up and attack and the others are able to Digivolve. All of their attacks don’t really harm Devimon. Ogremon is inside of Devimon, who taunts Leomon.

Devimon wants to kill TK as he’s apparently the one obstacle, all of the other Digimon stay as the Champion level, but are all weakened and unable to move.

Patamon attacks Devimon with his bubbles because he wants to protect Devimon and he wants to Digivolve, Devimon grabs Patamon, but then Digivolves. Patamon sounds so nervous in his evolution call out.
Everyone is very impressed by the hamster that evolves into an angel, Angemon’s staff pulls in the energy from the other partner Digimon, causing them to dedigivolve.

Angemon loses all his power fighting and defeating Devimon, Devimon says that there are other evil Digimon and Angemon has wasted his life fighting him.

TK is watching his partner die and Angemon tells him that he’ll come back if TK wants him to. Angemon reverts to an egg and TK grabs the egg and is thankful for Angemon.

The island reverts to its original state.
Matt wonders about the other Digimon across the sea, Tai says that they have to defeat them too.
A projector emerges from the ground, it’s Gennai! Tai asks him what he wants….

Rating for my Rewatch of Digimon Adventure Episode 13

A pretty decent episode to finish the arc, we get a pleasant reunion as the chosen children all come back together, and then we get to see the increasing teamwork and power that the chosen posses when together.

In addition to the solid character moments, we also learn a little more about the life cycle of Digimon, and how Digimon can die.

So what were your thoughts on your rewatch of Digimon Adventure Episode 13? Let me know in the comments or in the discussion thread on /r/Digimon!