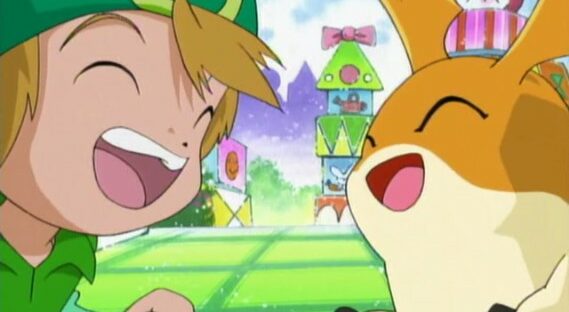 The final episode of the ‘split up chosen’ mini-arc. This time, instead of focusing on two DigiDestined, the episode focuses on the only child to be isolated except for his partner Digimon – the youngest chosen gets the focus of the episode!

“DigiBaby Boom”
(“Adventure! Patamon and I”)

The narrations always make everything sound so plesant in the English dub; this time, Sora mentions how Joe and her decided to explore this part of the island, which is totally not what happened, it wasn’t a decision at all!

TK and Patamon are falling towards land while Devimon is telling Ogremon and Leomon off for failing him. TK is drying his clothes as he landed in the water, and TK makes a comment about how somebody must’ve left the bathtub running like he’s never seen water before.

TK immediatly starts crying, and Patamon wants him to feel better and thinks what Biyomon would do, Patamon then starts crying because he can’t evolve and he wants to fly and Digivolve. TK asks Patamon what he’s Digivolve into and Patamon says he doesn’t know.

TK imagines possible evolutions for Patamon like Porkymon and Hogmon. Patamon says he’s not a pig and TK says there’s nothing wrong with being a pig. They hear a train going past but they can’t see it.

They then found somewhere that looks like some fairground and TK wonders if there’s fairyfloss. They then find ground that is extremly bouncy, and so they have a great time jumping around. They then find toys. Patamon says they should look around more, and then he hears something, which they then follow the sound of, which leads them to cradles with baby Digimon who were just born.

TK and Patamon find a DigiEgg and TK learns that every Digimon is born from an egg. They rub an egg as per the instructions, it then hatches and a cradle shows up. Patamon is suprised and TK asks why he didn’t remember, Patamon asks if he remembers his birth. TK remembers a moment from his childhood where he was playing with blocks, fell over, and started crying until Matt picked him up.

An Elecmon is fishing for food for the babies. We finally get a Digimon with personality that isn’t evil! Elecmon has a really mature voice compared to the other Rookie level Digimon.

Meanwhile, the babies start crying and TK and Patamon want to look after them, but they’re overwhelmed. Elecmon can hear them crying and rushes off. Thinking that TK and Patamon are evil intruders, he attacks. He calls them interlopers and barbarians. Elecmon explains that this is Primary Village where all Digimon are born and it’s his job to protect the babies. Patamon and Elecmon start to fight.

TK notices his Digivice is lighting up and says that “This isn’t good! He’s Digivolving”. TK points out they fight worse than he and Matt except they’re not brothers, he breaks them up and says that they’re upsetting the babies.

Elecmon tells them to leave the babies alone and Patamon says that Elecmon acting too mature is a sign of immaturity. Patamon wants to fight Elecmon and TK says that they have to solve this the right way without fighting.

TK being a precious pure angel sets up a tug of war battle for Patamon and Elecmon. Elecmon gives up and Patamon wins and Elecmon welcomes them to Primary Village and apologies for him acting mean.
Elecmon says he’s been upset with what’s happening on the island and thinks that Patamon is staying to help him take care of the babies.

Patamon asks Elecmon how to get to Infinity Mountain, and Elecmon says they will need expensive tools and gear to climb as it’s dangerous. TK says that Devimon is there and that he has to ask him where Matt is and is very emotional about fighting him.

TK wants everyone to laugh and not fight and just have friendship. Elecmon is motivated by his words and says that maybe the power of friendship can rebuild the island, and he runs off and abandons the babies I guess.

Rating for my Rewatch of Digimon Adventure Episode 12

A cute episode which continues to foreshadow Patamon’s evolution as well as the end of the first arc of Digimon.

Having the episode focus on one character rather than two really allows the viewer to learn more about how TK thinks and what his character is like, so far, he has been fairly quiet and Matt has been more or less speaking for him, so it’s nice to see him be his own individual character as well as being able to see Patamon’s personality.

In general, a cute episode and a nice break from the formulaic episodes as we dive into plot.

So what were your thoughts on your rewatch of Digimon Adventure Episode 12? Let me know in the comments or in the discussion thread on /r/Digimon!