October 15, 2018
This is one of the three or four Digimon that inspired this list (so far we’ve also seen Derumon, and another on this list is actually next for ‘K is For’…so get excited for that I guess).
So, J is For…
Jyagamon 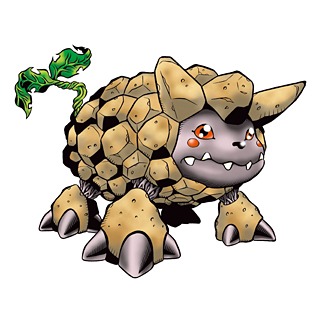 You know how you can do so many amazing things with potatoes? Such as hashbrowns, potato gems, chips, crisps, as an ingredient in cooking, etc?
Well add ‘Make an adorable Digimon’ to that list!
Jyagamon straight up translates to ‘Potatomon’ as ‘Jyaga’ and ‘Jyagaimo’ mean ‘Potato’ – it’s the Digimon equivalent of Crabby, the only step is potato.
Jyagamon is a potato encased in soil with his stem sticking out as a tail. I dig it. I mean, I could dig it, but I might scare the little dude.
This Digimon is another of the ‘smaller size’ retro Perfect-level Digimon, he’s never been shown as being super tough, but we did see a herd of them trample a Meramon in Tamers.
I’d also like to point out that one of Jyagamon’s possible prior evolutions in Burgermon. Another prior evolutions is Nohemon – a scarecrow, which you can loosely say ‘ah the Scarecrow eventually died and rotted, but the crops he was protecting were fertilised and he became a potato.’
Beautiful.
So yeah, ‘J’ was another easy pick for me because who doesn’t love potatoes?

Who’s your favourite underrated Digimon that starts with the letter ‘J’?