October 12, 2018
While there seem to be less Digimon that begin with ‘H’ than with ‘G’, this was still a hard letter to pick one Digimon out of.
So, H is For…
Hagurumon 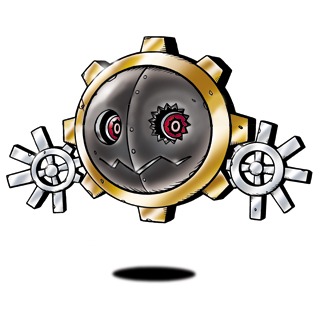 He’s a gear!
I have no idea how the creators of Digimon took a gear and managed to make it equal parts creepy and cute at the same time – he’s just so adorable but, in some ways, a little bit creepy in the face – almost making one think ‘is this a human that became a Digimon?’ For some reason, he’s oddly puppet-like.
It’s another Digimon that’s been around since almost the beginning, has been in the anime a lot, and even a possible starter Digimon in Cybersleuth – and yet there’s a considerable lack of love for it from the fandom!
In addition, Hagurumon is a lot better looking than the Pokemon-take on ‘living gear’ – Klink.
It’s sometimes fun to compare Digimon with similar-themed Pokemon to see who did the better job. It’s not always Digimon either – Snimon/Scyther? Scyther 100%, but mainly because his face is cuter.
There’s not much more to say. I dig his simple, yet effective design!

So what’s your favourite mon that starts with ‘H’?

If you’re curious, my other considerations were Hanumon (Apemon), Hangyomon (Divermon), and HippoGriffomon.
Mainly nostalgia-mons! Also I notice a surprising lack of love for Hawkmon considering he was a main character.
We just finished recording this week’s podcast! We will now be sending out our notes to backers on Patreon pledging $5 or more per month, the segment guide to those pledging $7 or more per month, and the unedited episode recording to those pledging $10 or more per month!
You can help out the podcast and blog in the following ways:
And thank you to our supporters on Patreon; Sam Krieger, Stevie, Joe, AnimeGuyKurosaki1, Chakmon, Hiro Alato, Steven Reeves, Kaida Washi, Mac, Chisai, Kyle, DaLadyBugMan, Tom, GlitchGoat, Matthew, Anthony, Lizmet, Quinn, Sithobi, Meagan, Neoboo, The Time Optimist, Nicholas, Michael C, and Starry!