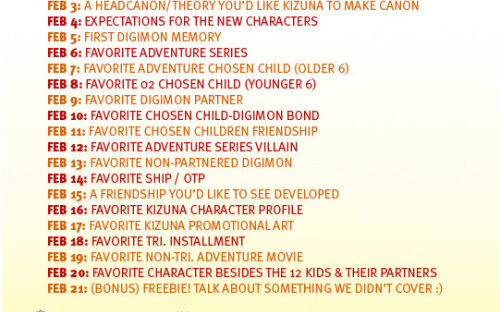 In anticipation for Digimon Adventure: Last Evolution Kizuna, takerusfedora and gossipchii have created a set of daily Kizuna related hype questions, which can be found here, starting from Digimon Kizuna first thoughts. I’ve been busy and unable to answer the first three days worth (with it being February 3rd as of writing this), so I’ve got some catching up to do, so, here are my Digimon Kizuna First Thoughts, Expectations, and Headcanons, for the first three days of February!

I wasn’t surprised at all, in fact, my response was just a low grown followed by “can we please just have a new series and let the Adventure kids grow up?”.

I don’t dislike Adventure, and I didn’t dislike Tri, but I really wanted Tri to have a more complete ending and not have an additional continuation. While it’s exciting to see the children from the first two seasons become adults and I’m sure it’ll be an emotional journey if the memorial shorts are anything to go by, but I’m just a pessimist and wish we could have more ‘new’ Digimon stories.

Having said that, I remember landing in Japan on the release day of VJump in December 2018 and rushing to the newsagents at the airport to pick up the issue so I could see the new look of the Adventure chosen, so I guess I’m not a complete curmudgeon.

I made a post a few weeks ago about my expectations and predictions overall for Kizuna, so if you’re interested to read more about what I want to see, you may want to read that post.

In general, what I expect is a fairly emotional ride that focuses on the characters, their growth, their relationships, and their Digimon, rather than on battles and bad guys. It’s what I hope for, anyway.

And, for something called ‘LAST EVOLUTION’, I’d expect it to be an emotional movie.

FEB 3: A Headcanon/theory for Kizuna to make canon

Yamato’s Father is one of the original chosen children.

Otherwise, I would also like to see any character be confirmed to be not-straight. Hopefully Miyako or Mimi, as this would be a chance for Digimon to have further representation after Appmon, but I won’t be too disappointed if no such confirmation is made.

So, in the leadup to Last Evolution’s release, what are you Digimon Kizuna First Thoughts, Expectations, and Headcanons? Are you excited to watch the movie?

Tomorrow, I’ll be writing about my expectations for the new characters!