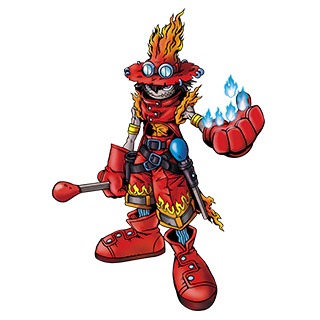 Yeah Wizarmon is cool and all but have you tried adding FIRE!?
He’s like Meramon, Wizarmon, and Fladramon had a baby and it stole Daisuke’s goggles.
While the other Digimon I’ve mentioned in my ABCs of Underrated Digimon so far have been sort of known at least a little bit, I’m not even sure anybody has ever even seen this guy! He’s just so cool!
I always have loved Wizarmon’s design but I find FlaWizarmon’s design even cooler. He also reminds me a bit of a red mage from Final Fantasy.
He’s cool (for a guy on fire) and adorable.
He’s only been seen as a background character among the armies in the movie for Frontier and he shows up in Young Hunters but besides that he’s not really seen that much!
I think he’s just one of those unlucky monsters who were in the card game but didn’t get much love else where – a damn shame.
Also his hat has PIERCINGS? Baller.

So what’s your favourite Digimon starting with the letter ‘F’?