So last month something that I’ve been looking forward to for awhile arrived; the Digital Monster 20th Anniversary Artbook.
I really like artbooks, especially when they contain concept art or anything relating to ‘betas’ of games (eg, I love hearing about the beta versions of the Pokemon games) or concept ideas for the product or franchise.
I also have a fairly large amount of nostalgia for the original Digimon virtual pets as this was my introduction to the franchise since the anime wasn’t really all that popular. I think the only full season of Digimon I watched as it was airing from the first to the last episode was 02, everything else I would only watch a couple of episodes, maybe every few episodes (I started watching Adventure in the Dark Masters arc and when I was watching Tamers, the tv channel decided to take it off the air after like episode 36). First of all, the box that it arrived in. Has the logo. Pretty standard. 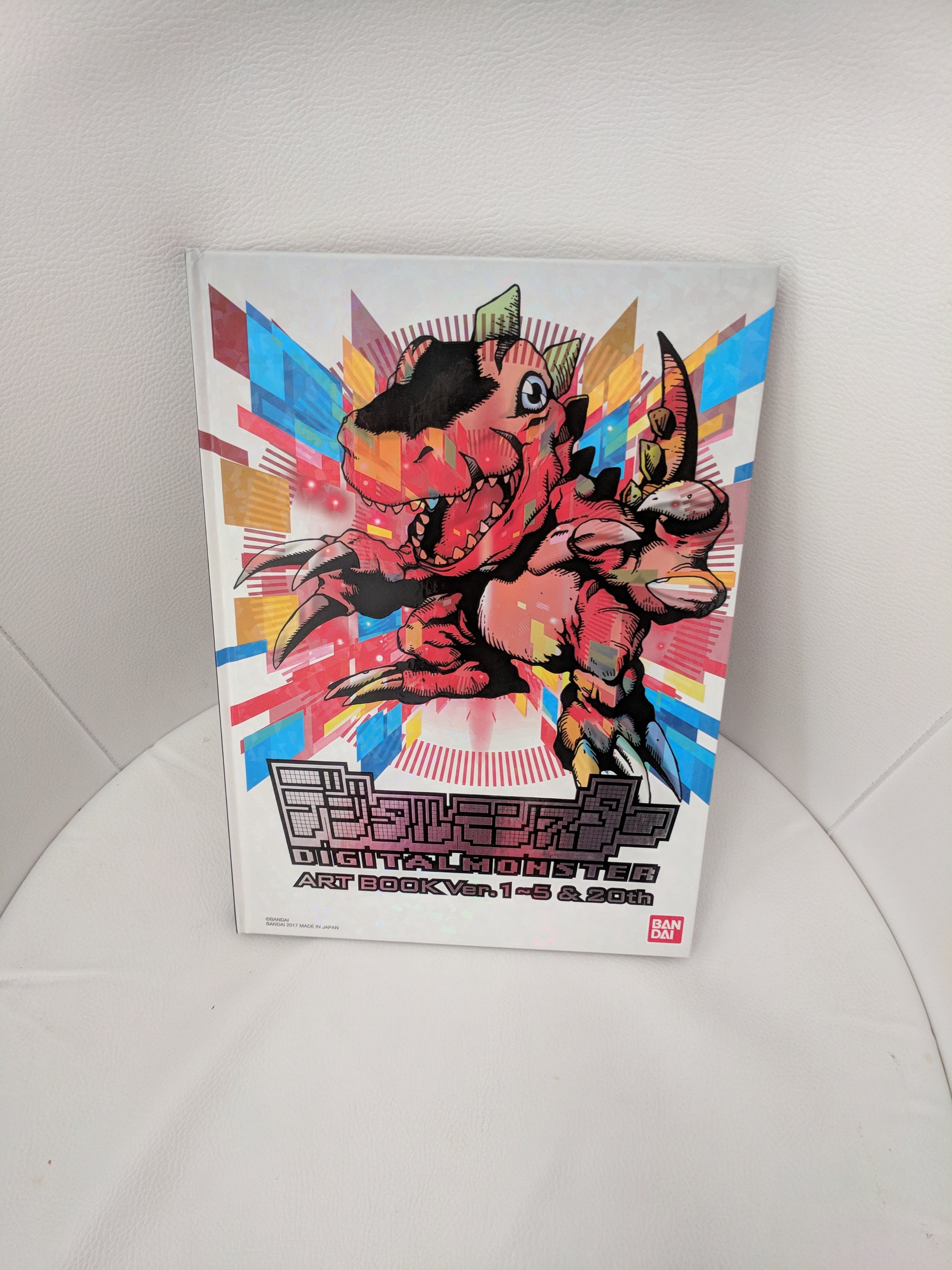 Here’s the book! Pretty cool cover design. I think I’ve mentioned a few times on the podcast about how happy I am that they still show Tyrannomon as the poster child for the vpets.
Tyrannomon also struck me as the most famous Digimon when I was a kid before I started watching the anime. He was everywhere! He was on every commercial for the virtual pets and he was on the box for the version one. I thought my virtual pet was fake when I couldn’t get Tyrannomon or even ‘Darkmon’ (which was Devimon’s name on the English versions of the vpets) because I was the only kid with a version 2 (I know six versions were released in Australia but at the time where the fad was huge, only two versions had been released. I came pretty late to the fad). 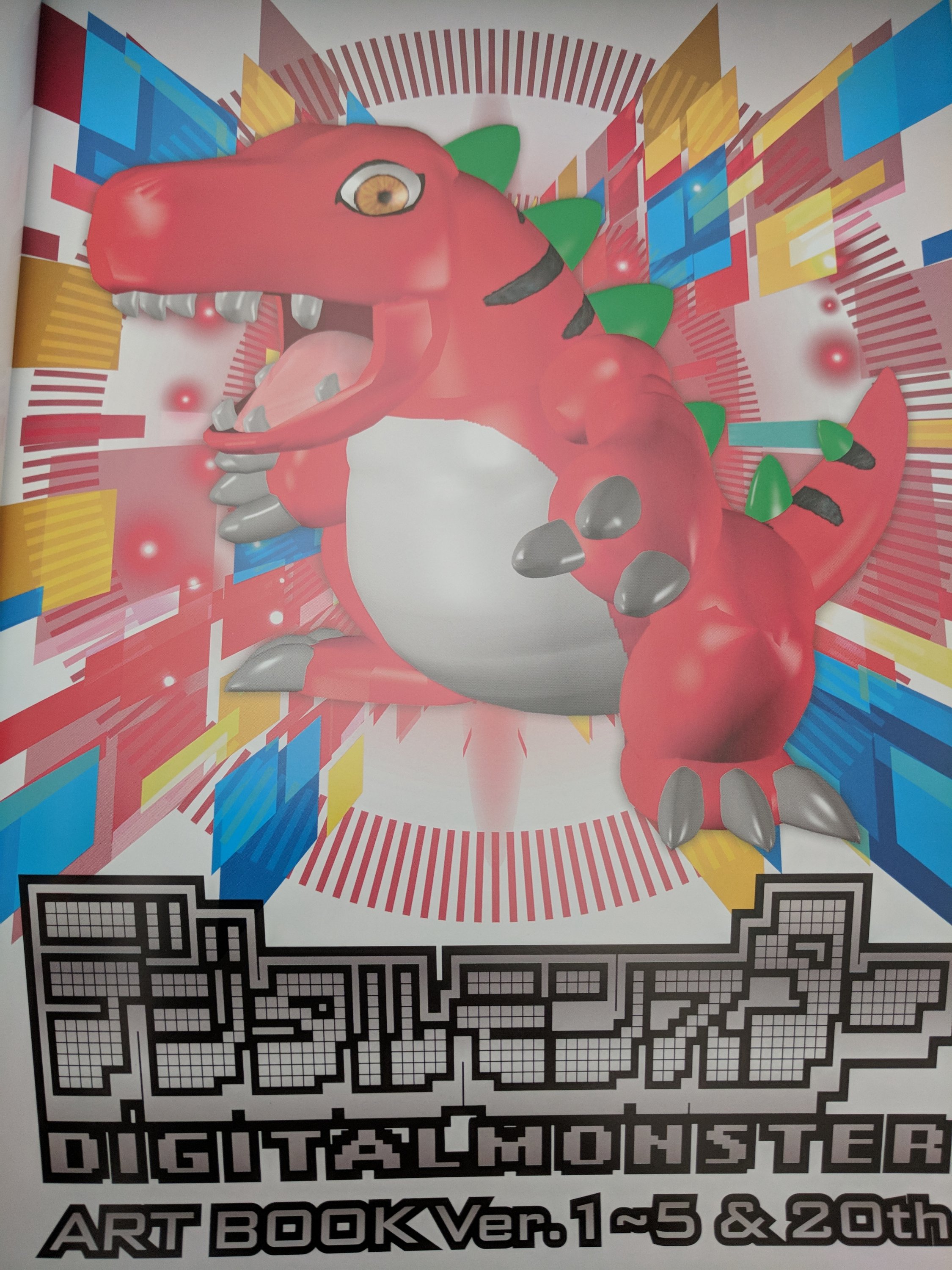 More Tyrannomon! I love him! Images like these make me pretty happy, I was very happy for this to be one of the first things I saw when I opened the art book. 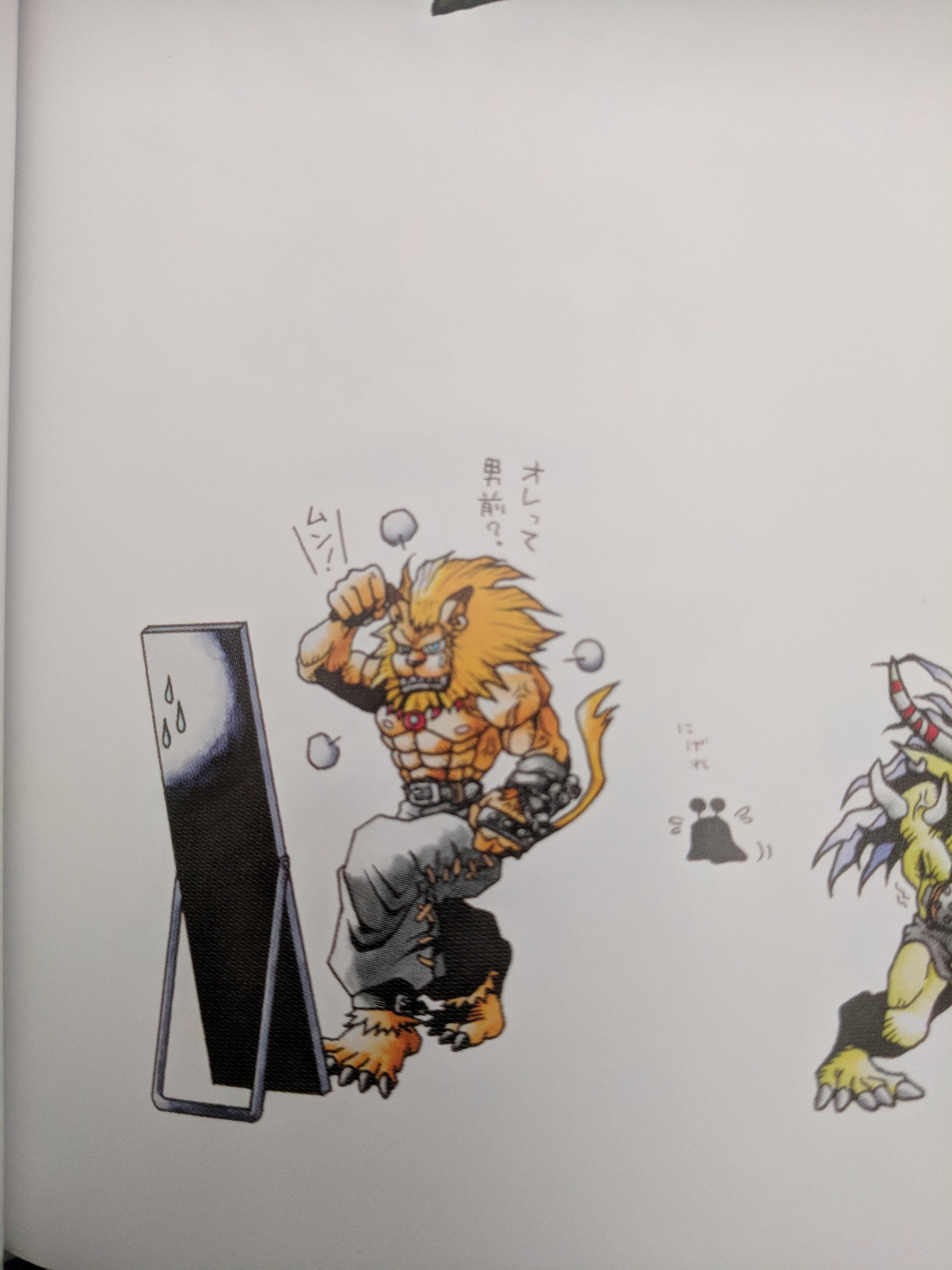 Probably the best part about the book is how it has each Digimon that makes an appearance in the ver20th vpets and each page has glorious art and concept art such as flexing Leomon. 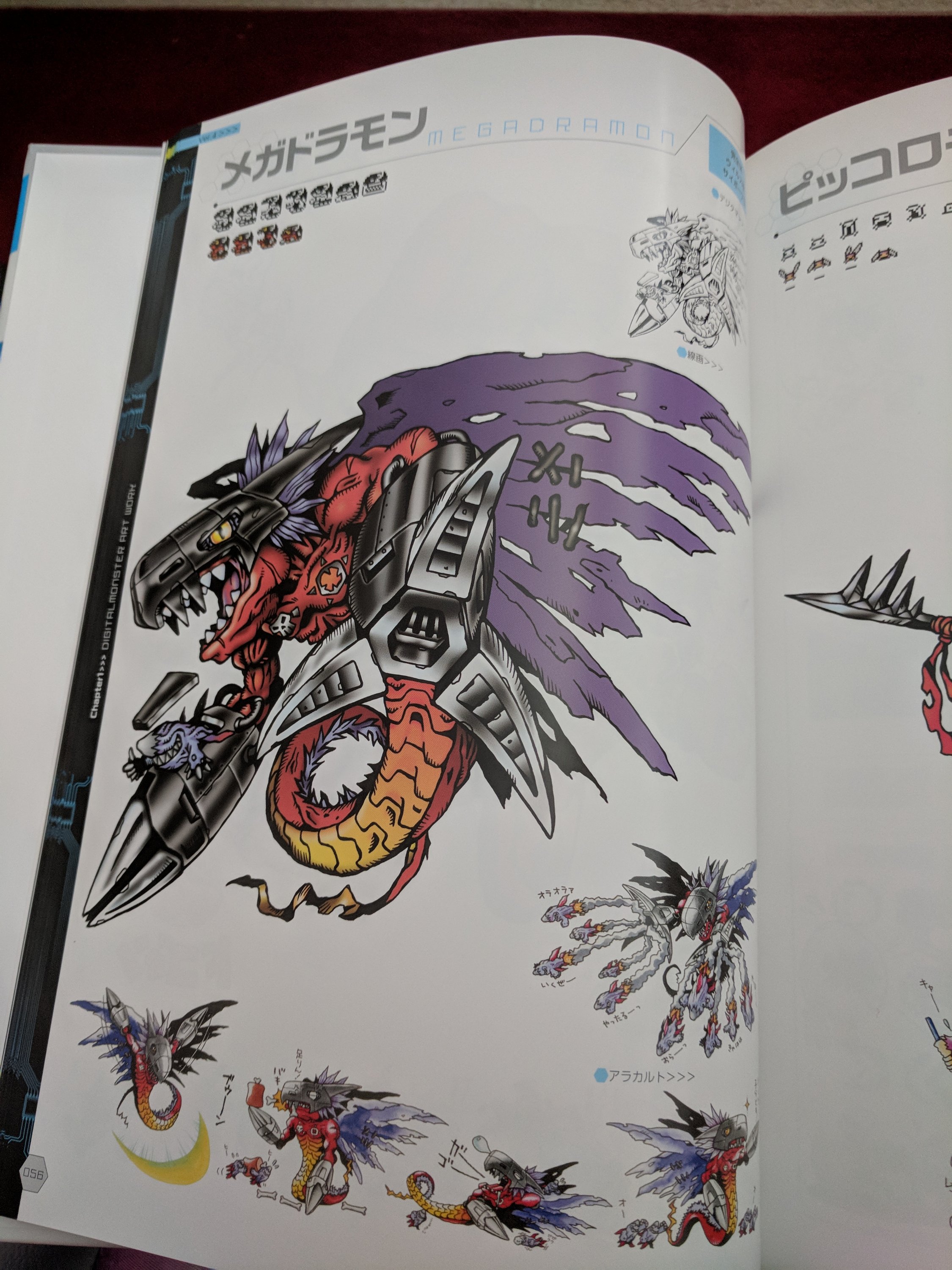 Basically every page (except for a few) features a Digimon eating some of the ‘bone with meat’ from the vpets. It’s always cute, no matter how monstrous the Digimon is. 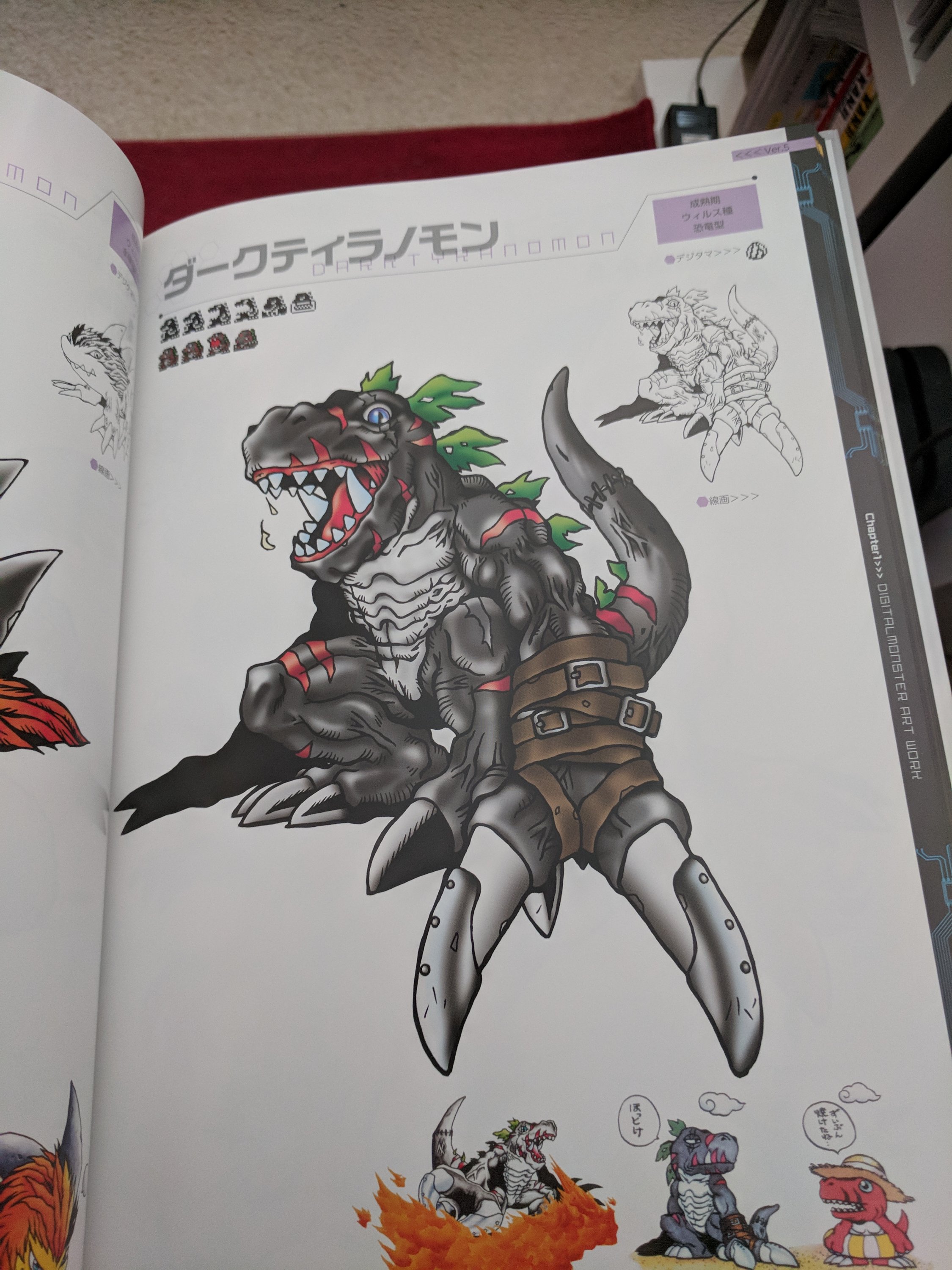 There’s also some cute art, such as Tyranomon and DarkTyrannomon hanging out at the beach! 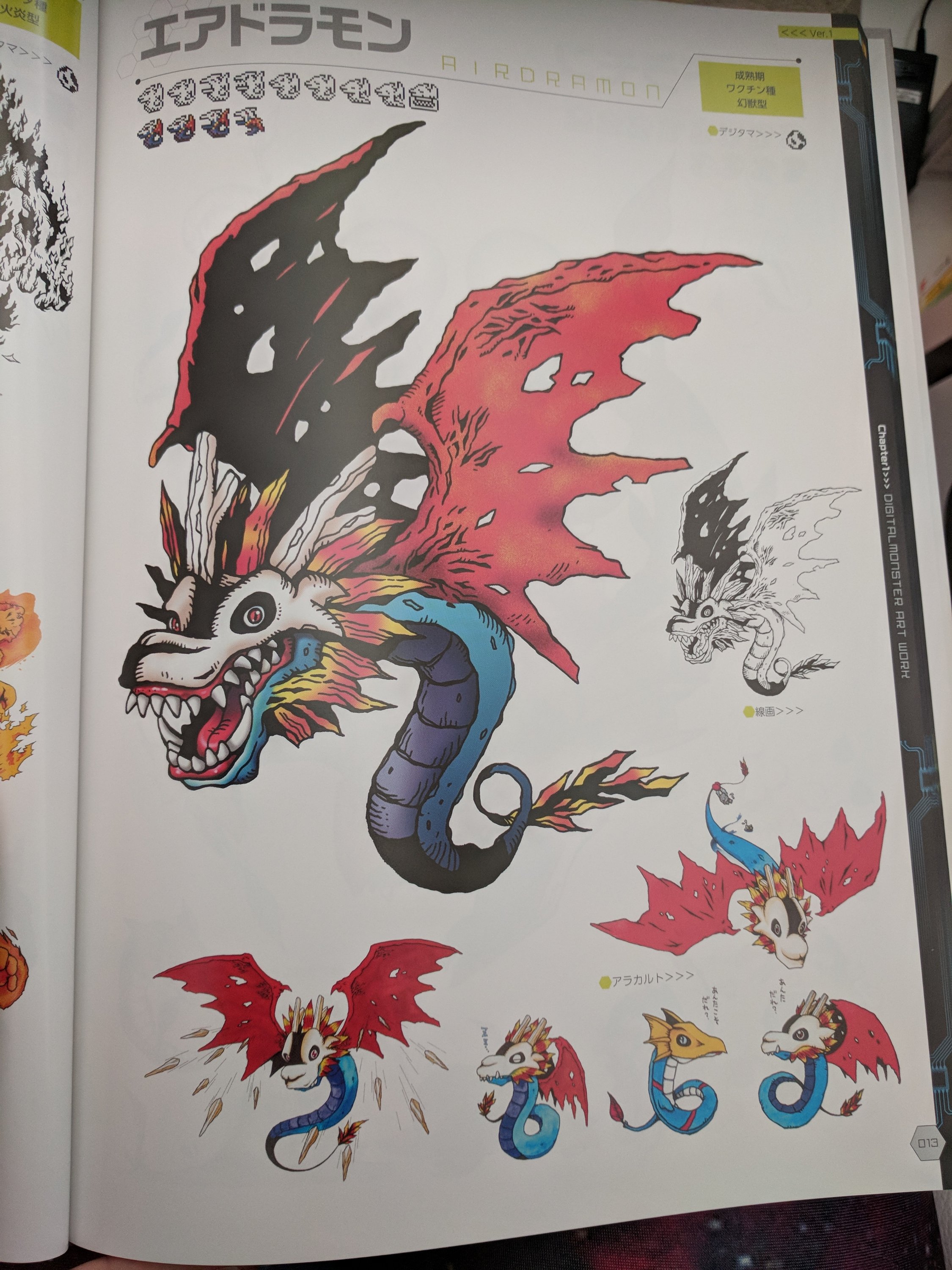 Airdramon is still the best, no art with Airdramon and bone with meat though, which is weird. 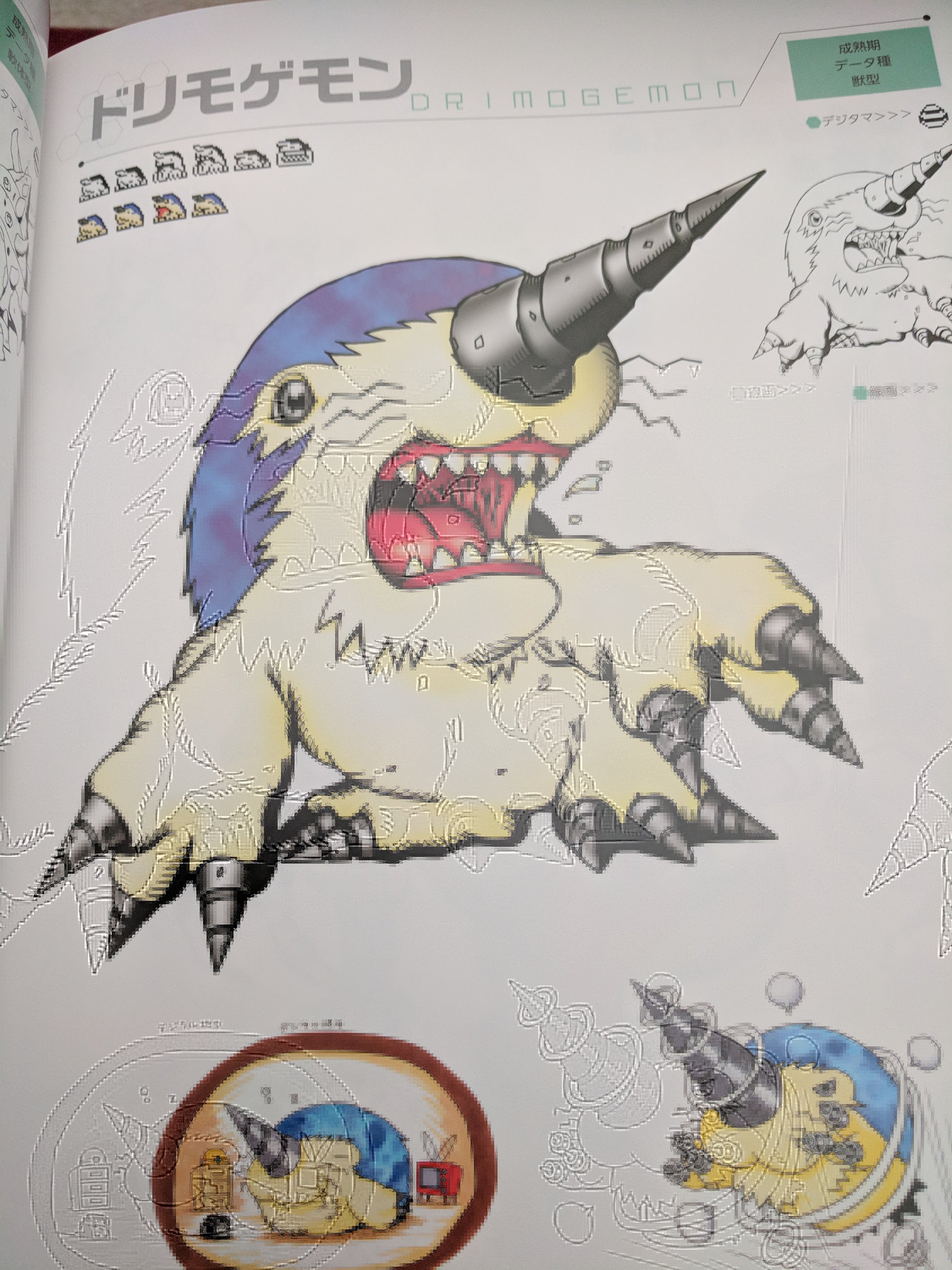 Drimogemon always gives me a rush of nostalgia. I blame Digimon World.
Also look! He’s in a cave!! Speaking of concept art, there’s also information about the original concepts for Digimon (“Capsule Zaurus” maybe some virtual pet version of “Pocket Zaurus”). There are some very interesting initial designs for some of the monsters which look more similar to Pokemon in how they’re kind of cute. At the bottom right you can see a few concept designs for Digimon that we actually know of.
The Digimon shown in the left image on the bottom left page seem to be Tyrannomon, Monochromon, and Seadramon as well as even earlier versions which almost resemble Tamagotchi characters. The concept for Seadramon looks like a cross between Airdramon and Seadramon (rather, it looks like Airdramon without wings).
In the right image, we get a few baby Digimon designs. Concept Koromon looks like Dorumon’s in-training form. We also get a concept Numemon which seems to look more friendly. 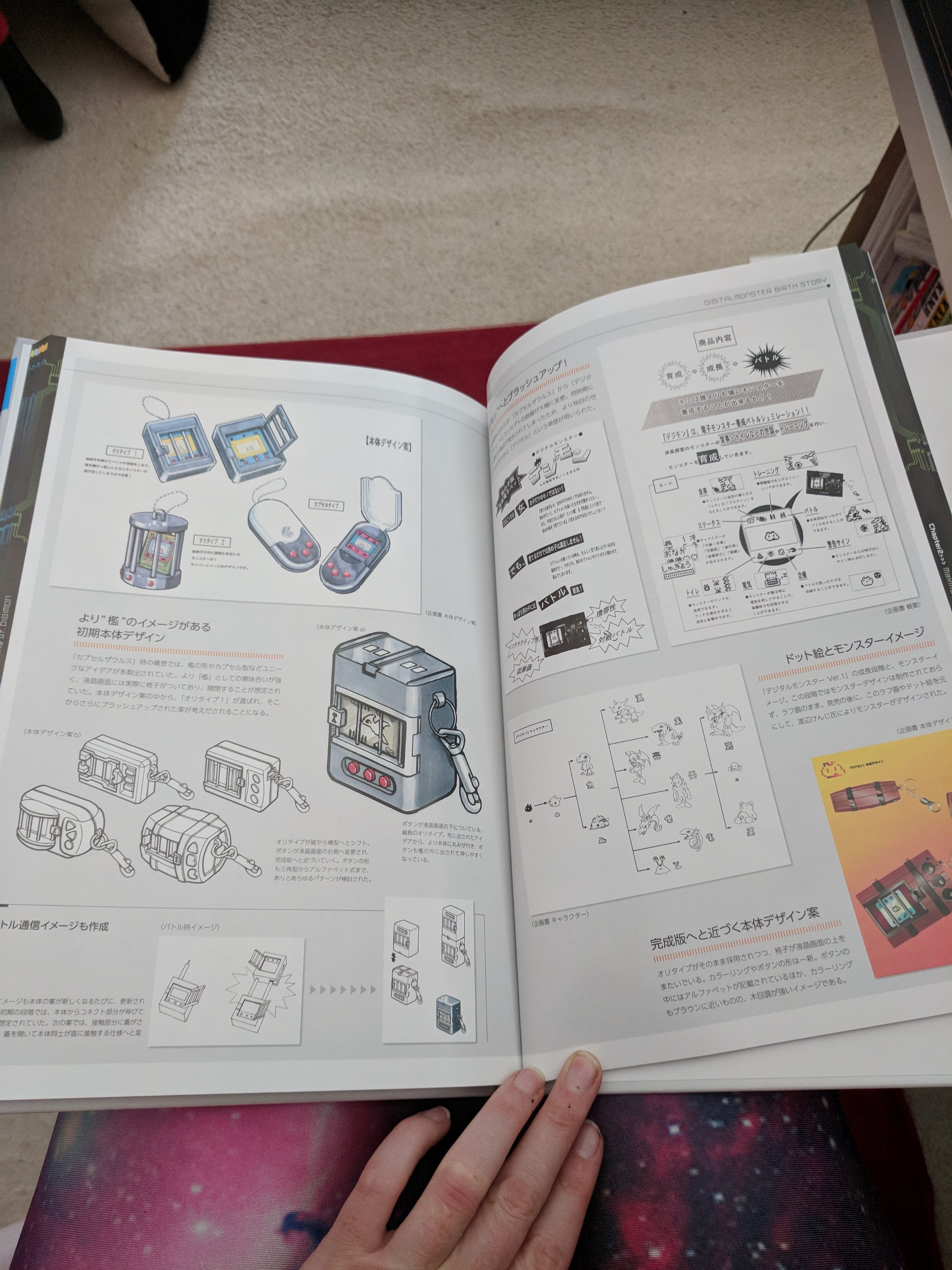 The book also has some pretty neat concepts for the virtual pets. They went through a few designs before landing on the final design. However, I do rather like the flip-phone looking style as well as the design where the pet is actually in some cylindrical cage.
There’s also the evolution chart for the first version! Which is pretty neat! One of the most interesting pages is this size chart which compares the size of some of the Digimon.
I never could have possibly imagined how enormous GraceNovamon is – we only get to see her leg!! It’s interesting considering we already know Mugendramon and Examon are huge. They could probably be stepped on by GraceNovamon without her even noticing. The images are of pretty amazing quality too. I didn’t use my scanner as my scanner chose not to like me, the quality can still be seen clearly even with just photos from my mobile phone.

This art book exceeded expectations.
I was only expecting an art book and was pleasantly surprised to have such detailed concept art and information (which I had never seen before) as well as that size chart I mentioned earlier which puts some things in perspective (if you had asked me prior to reading this art book, I would have said GraceNovamon was probably twice as big as an adult, maybe three times as tall as an adult, Omegamon’s size maybe).
This book, while seemingly more expensive than other artbooks I have purchased (usually around 40-70AUD), this one was around 100AUD. However, I would definitely say that it is worth it, especially if you:
Cost: $$$
Design: 10/10

I also intend on reviewing the art book that was in the Hacker’s Memory limited edition soon-ish too if people are interested in that. Though the art book for that isn’t as amazing and it’s mainly just art and concept art from other Digimon Story games, it’s still quite a nice art book.