November 1, 2018
Okay, easy one here. Knew the answer without looking at any other Digimon starting with the letter ‘R’. He’s cool! He’s never been in the anime, he’s from the card game, and he’s another Armor-level Digimon…
R is For…
Rinkmon 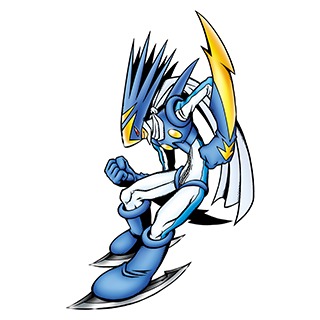 Yeah, okay, so Wikimon puts him under L but he’s written as ‘Rinkmon’ in Katakana for obvious alphabetic reasons and him being a speed skater, which would mean..y’know…rink..skating rink…I’m just putting him under ‘R’.
However, he’d still be my underrated Digimon for the letter ‘L’ in any case!
Rinkmon is what happens if you evolve Hawkmon with the Digimental of Friendship. This occurred in the Valentines Day 02 Drama CD where the 02 kids accidentally swap D Terminals and have to use another chosen’s DigiMental – Miayko accidentally takes Daisuke’s.
Rinkmon was also in the card games as were all of the ‘alternate armor evolutions’.
But forget all that, he’s a dude on ice skates and that is completed bones and I totally dig it!
So what’s your favourite Digimon starting with the letter ‘R’? I didn’t even need to look at the list!
By the way, we’re recording Episode 157 of the podcast tonight and we’re finally finishing off Part 2 of Xros Wars (meaning we’re done with the dub!)
You can help out the podcast and blog in the following ways:
And thank you to our supporters on Patreon; Sam Krieger, Joe, AnimeGuyKurosaki1, Chakmon, Steven Reeves, Kaida Washi, Mac, Chisai, Kyle, DaLadyBugMan, Tom, GlitchGoat, Matthew, Anthony, Lizmet, Quinn, Sithobi, Meagan, Neoboo, The Time Optimist, Nicholas, Michael C, and Starry!