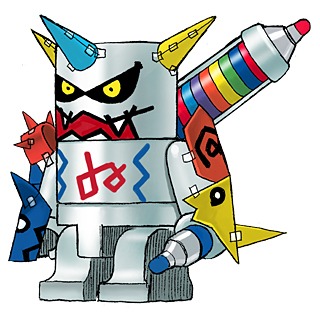 There are so many Omegamon variants – I’m even convinced we’ll probably see a new variant in the next year, possibly with the release of the Digital Monster X (I’d be even tempted to say this year but that’s not super super likely since we already had one this year) – but out of all of them, I feel like Omekamon is one of the least known and least appreciated. The dude is just Lego!Omegamon (but is similar in form to a small Japanese toy figure that Digimon had a few releases of)!
However, he isn’t exactly an Omegamon variant – he’s meant to be kinda like Betsumon in the way that he’s in costume and has a pencil on his back. In addition, he’s actually only an Adult level Digimon and not an Ultimate like Omegamon and his variants.
Also his art has squiggly lines – it’s especially notable at his feet, it’s a cute little tid-bit.
Honorable mention to Olegmon for his great character in Xros Wars, I’m just not a huge fan of his design as much as I am for Omekamon.

So what’s your favourite Digimon starting with the letter ‘O’?